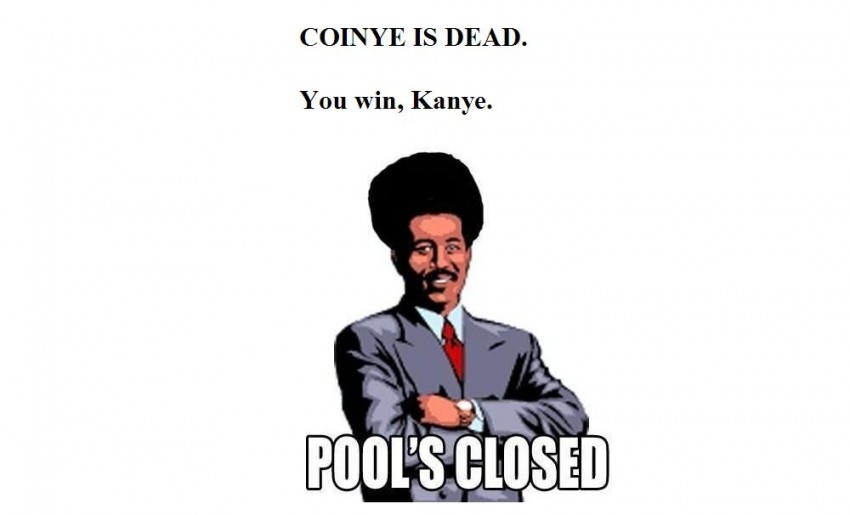 Singer, songwriter and rapper Kayne West has filed a trademark infringement suit against an unnamed group of developers. West claims the developers of a digital currency called Coinye are attempting to trade on his name and image.

The digital coins bear the likeness of a fish with a human head wearing sunglasses that does bear a resemblance to West. The name and logo may also be a play on a segment from the animated Comedy Central series South Park which lampooned the singer.

In fact, many in the tech press originally suggested Coinye might not be a real business at all, but a joke, The Verge reports.

West doesn’t seem to be laughing. Excerpting from the suit filed by West’s company, The New York Post quotes:

“Defendants have willfully and admittedly traded upon the goodwill and notoriety of Kanye West, one of the most famous entertainers and brand names in the world. Without hesitation, defendants have usurped Mr. West’s name and likeness for the sole purpose of propping up the perceived ‘value’ of the defendants ‘digital coin mine’ and its ‘cryptocurrency.'”

Whether a real business or not, the company seems to be no more after West’s legal action. Messages on both the Coinye site and a thread setup on Reddit seem to indicate developers have moved on. West also targeted some exchanges ready to work with the mysterious digital currency in his suit.

The new-age currency company tried to evade the issue by moving from a .com domain to a domain in India (.in), but even that couldn’t save them.

The moral of this crazy story is: Get your own name!

You can’t profit off the trademark, or name and likeness of a rich and famous person — no matter how clever the infringing name might be (and it was pretty catchy, we have to admit).

Before choosing a name for your business, be sure to research it to make sure you are not infringing on anyone else’s trademark. And understand the basic issues surrounding trademarks to better protect your business in the future.