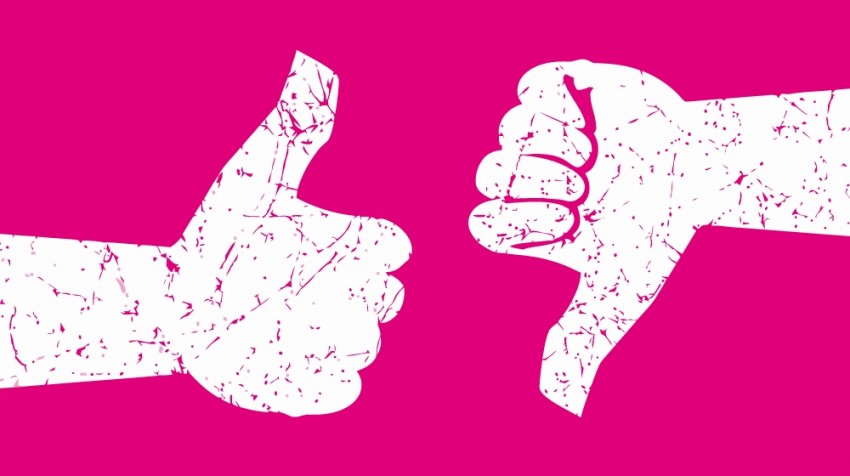 Small business owners tend to be optimistic by nature.  You have to be, if you want to overcome the obstacles of running a business.

Still, the economy has been pretty rough since 2008.  Are there signs of improvement?  If I had to sum it up based on two small business optimism surveys, I’d say it’s “status quo” or perhaps “cautious optimism.”

Per the latest NFIB Optimism Index, small signs of optimism have appeared. But they are hardly robust signals. According to the National Federation of Independent Business’s Chief Economist, William C. Dunkelberg, and analyst Holly Wade in their commentary to the Index, “Consumers are a bit more optimistic as are small business owners, but in the context of history, these measures are still weak.”

Small businesses are creating some jobs and hiring, and they are spending on capital for their businesses. In general the outlook for sales and business conditions was reported to be a bit better for the upcoming months:

“NFIB’s December survey did provide some positive signals, with the best job creation figure since 2007 and a large increase in the percent of owners reporting actual capital outlays in recent months. The jump of 9 percentage points in December over November suggests that most of the increase in spending came very late in the year. Expectations for real sales growth and for business conditions over the next six months improved substantially over November readings as well.”

As you can see from the chart below, since 2008 optimism has been dismal, historically speaking.  There’s been an upward trend, including that little uptick next to the red arrow, but it’s still not back to “normal” levels. 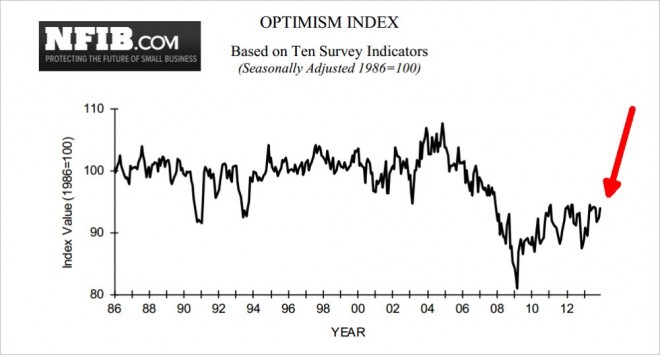 The numbers reported in January are based on a December 2013 survey of 635 small businesses from among the NFIB’s 350,000 members.  The businesses surveyed are from various industries, with retail, construction and agriculture well represented.  The majority have fewer than 20 employees.

The Hiscox eDNA survey actually dropped in optimism from 2012 to 2013.

However, the bright spot worldwide is the United States – comparatively speaking, at least.  The Hiscox survey covers multiple countries where Hiscox does business.  The United States reported the most optimism for the year ahead, in the most recent Hiscox survey. Fifty percent are optimistic (see green arrow in chart below): 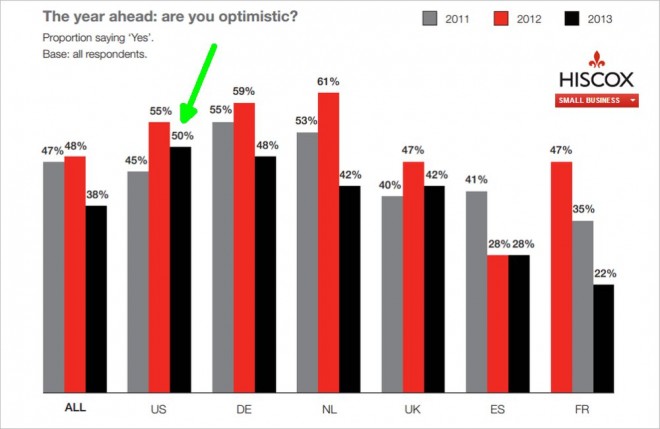 According to Hunter Hoffmann, head of U.S. Communications for Hiscox, “Forty-eight percent of those in the U.S. reported increased revenue.  That’s better than other countries we track,” he told us in an interview recently.  The average of all countries is a 37% increase.

Hiscox has over 40,000 small business insurance policies in the United States.

Hiscox conducts the survey from small businesses it insures.  They fall into professional services industries, such as IT consultants, marketing firms, real estate professionals, personal trainers, health and beauty salon owners, life coaches and event planners.  Many of them are younger businesses owned by up-and-coming entrepreneurs.  “They tend to be optimistic and likely to implement innovations in their businesses” leading to positive results, Hoffmann added.

Hiscox’s small business portfolio consists of small businesses with under $2 million in annual revenues (usually equating to fewer than 10 employees). About half are solo entrepreneurs.  Hiscox also insures larger-sized small businesses through brokers.  The survey covered 3,000 small businesses, with 500 from the United States.

Business owners may be optimistic, but they are realistic, too.  According to Hoffmann, they insure their businesses to “make sure their hard work doesn’t go away through no fault of their own or an accident.”  Hiscox has seen its insurance portfolio grow since 2010, when it brought its small business offerings to the U.S. market.  The company offers three main types of insurance.  Professional liability covers the business for liability when you give advice. General liability covers you or staff at a client location, or if the client is on your premises and gets injured.  And a business owners’ policy includes professional liability coverage but also includes coverage for office space and damage to it.

What’s your attitude toward your business’s outlook?  Cautiously optimistic?  Or status quo?