The Value of a Twitter Follower, In an Animated Presentation 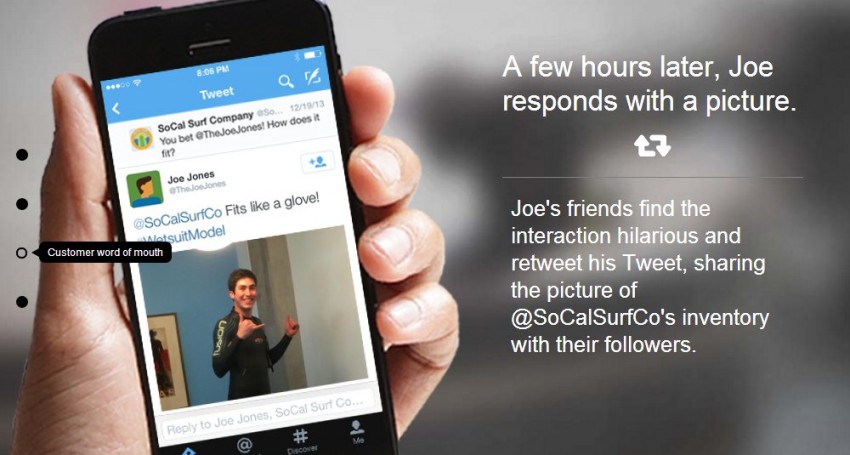 Have you ever wondered about the value of a Twitter follower?  Or perhaps you know a colleague or have a manager who still needs to be convinced of the value of Twitter.

If so, take a look at this animated presentation from Twitter.  It’s called “The Value of a Twitter Follower.”

It illustrates how one person who checks out your business via Twitter, eventually may lead to new sales.  One follower can lead to new followers through retweeting and interacting.  And those followers and their word of mouth activity eventually lead to website / store traffic, sign-ups and sales.  The real-world follower progression is described this way:

And start all over again.

One of the best things about this presentation is that it is realistic.

(1) It doesn’t try to give you an exact dollar amount per follower.  That’s almost impossible given the vastly different businesses out there.

(2) While it’s possible that someone may discover your Twitter feed and instantly buy something that first time (yes, it does happen occasionally) — usually it’s not a straight one-shot path.  The real-world path to a sale from Twitter tends to be more nuanced.  It may involve word of mouth spreading from one person to another. It may involve a series of several activities that eventually lead to a sale.

In the animation, you see the scenario of Joe the surfer who gets a smoothie with friends and discovers a new surf store next door to the smoothie shop. He immediately checks out the surf store’s Twitter feed on his smartphone.  He begins following the surf store’s Twitter account. He then sees great new deals and passes those on to his friends.  He gets help solving a surf board problem, and he also signs up for the company’s newsletter.  Later on he sees a good deal on a surf suit and buys it from the store. It ends with him tweeting a photo wearing his new surfing suit.

By being active on Twitter, the surf-store business picks up new followers, word of mouth, newsletter sign-ups and eventually sales. If you have ever heard of the phrase “the kind of advertising money can’t buy,” then that surely applies here.

You don’t need millions of followers to get more business.  The example involves 17 new followers — a realistic number for most small businesses.

The animated presentation is backed up by data from a small business survey conducted for Twitter.  We covered some of the data here: 72% of Twitter followers are more likely to make a future purchase.

The presentation is the brainchild of the official Twitter Small Biz (@TwitterSmallBiz) channel. You can find the animated Twitter presentation here.