98 Percent of Mobile Malware is Aimed at Android Users 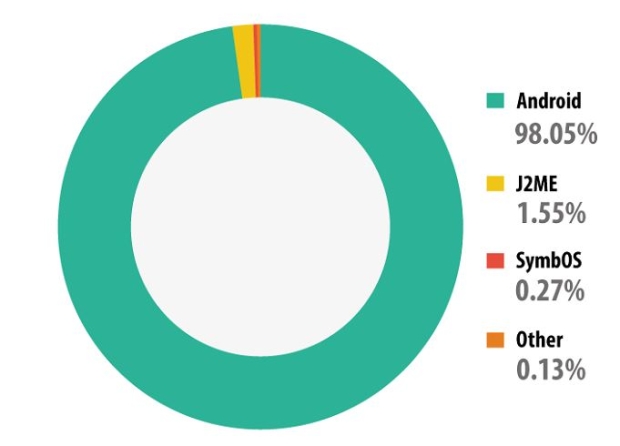 This is largely because of the popularity of the platform. But the study also notes the “vulnerability” of Android’s architecture as a reason the mobile operating system is vulnerable. And most of this malware is aimed at stealing money, including targeting credit card information.

The report also says the mobile malware economy has moved from individual actors to more organized groups of programmers and developers mostly designing malware for profit.

“It is safe to say that today’s cybercriminal is no longer a lone hacker but part of a serious business operation. There are various types of actors involved in the mobile malware industry: virus writers, testers, interface designers of both the malicious apps and the Web pages they are distributed from, owners of the partner programs that spread the malware, and mobile botnet owners.”

Malware is spread primarily through apps downloaded from third party sites other than Google Play though a recent report also indicates the amount of Google malware on Google’s store is also increasing.

Of course, being aware that your mobile device is nearly as vulnerable as your computer is the first step in protecting your business from being the next victim to an attack. We’ve recently noted that although mobile devices are increasingly being targeted, device makers are investing in defenses, too.