60 Percent in U.S. See Current Economic News as Neither Good Nor Bad 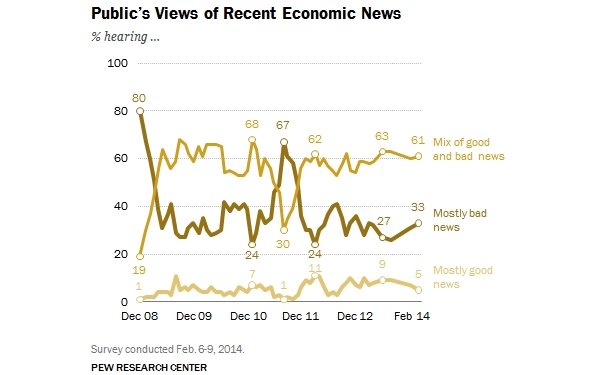 It’s easy for small business owners to get bogged down with the idea that a perceived “bad economy” is hurting their sales.

Would it surprise you to learn that the majority of Americans don’t see the economy that way at all?

If the public gets its perception of a good or bad economy from the news, then most Americans have mixed feelings, based on new data from Pew Research.

Pew’s survey asked more than a thousand adults recently whether they hear, see or read mostly positive, negative, or mixed economic news in the media. The study found that 61 percent of the public see news on the U.S. economy as mixed. But they do remain cautious.

“Over the past year, the unemployment rate has fallen, but so too has the share of Americans in the labor force. The stock market rose during much of 2013, before falling at the start of this year.

Through it all, the public’s perceptions of economic news have changed very little.”

The amount of the public hearing all negative news on the economy has dropped considerably from five years ago, though. In December 2009, about 80 percent of people surveyed by Pew said they heard mostly negative economic news. Since then, however, that rate has steadied to around its current level.

Today, only about one-third of the public, 33 percent, say they hear mostly negative reports about the economy through the news media. At the same time, just 5 percent hear all glowing reviews of economic conditions, Pew’s latest indicators suggest.

So don’t assume negative attitudes about the economy will hurt you business. They may not be as negative as you believe.