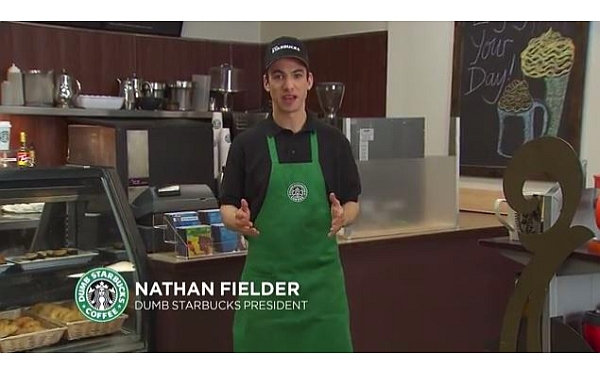 Plenty of buzz surrounded a mysterious “Dumb Starbucks Coffee” cafe that opened in southern California over the weekend.

What has happened since should get the attention of every business owner. It reveals the potential power and influence of viral marketing and the importance of protecting a brand’s identity.

The coffee shop, almost a dead ringer for Starbucks, started serving free coffee on Saturday and Sunday at a strip mall in Los Feliz, Calif., a suburb of Los Angeles. The only marketing was a tweet from the coffee shop’s own account:

Based on photos posted online by visitors, the outside and inside of the cafe seemed almost identical to a Starbucks. The only difference was the addition of the word “Dumb” in front of the brand’s iconic name. Products were similarly named: Dumb Venti, Dumb Espresso, Dumb Tea, Dumb Norah Jones “Duets” CDs, etc.

At its busiest, people were lined up outside for more than an hour to get a free cup of coffee. And the coffee wasn’t even that good, according to some customers who talked to inquisitive local reporters.

As it operated throughout the weekend, speculation grew about who might be behind the cafe.  Employees said they were hired via Craigslist and didn’t know the owners. There was also question whether this was a legitimate business or some kind of prank.  How could it be legal to run a business that was essentially a rip off of such a popular brand?

Starbucks told the press at the time  that the company was still investigating its legal options.

In an FAQ sheet prominently displayed inside the store, the unknown owners said they were operating under the protection of “parody law.” At a press conference Monday, the person behind the business/hoax, take-your-pick, was revealed to be Canadian comedian Nathan Fielder, who has his own show on Comedy Central:

In the end, it’s unclear whether Fielder really considers his Dumb Starbucks Coffee a prank or a real business, insisting he plans to open another location in Brooklyn.

But in the end, it wasn’t Starbucks that got Fielder. It was the Los Angeles County Health Department, who shut the coffee shop down on Monday for not having the proper permits.