Has Your Business Performed a Hat Trick? 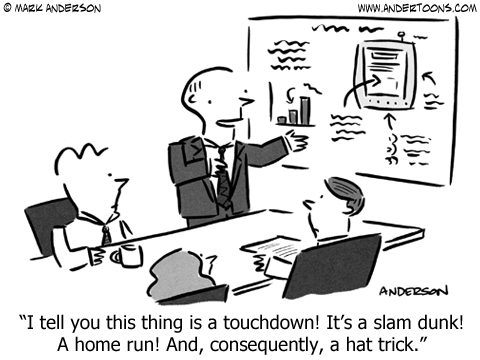 I’m not really much of a sports guy.

I live in the Chicago area and by default root for the Cubs. But if you asked me to name a single player on the team, you’d be waiting a while.

Still, I’ve been trying to do more sports themed cartoons recently and had written down words to play with: Touchdown, home run, slam dunk, etc. And then I remembered something called a hat trick.

I thought it had to do with hockey goals and three of something or other, so it was off to the Internet where Wikipedia told me that:

“A hat-trick or hat trick in sports is the achievement of a positive feat three times or more during a game, or other achievements based on threes.”

Mix it all together in a business setting and you’ve got this cartoon. Game, set, match!