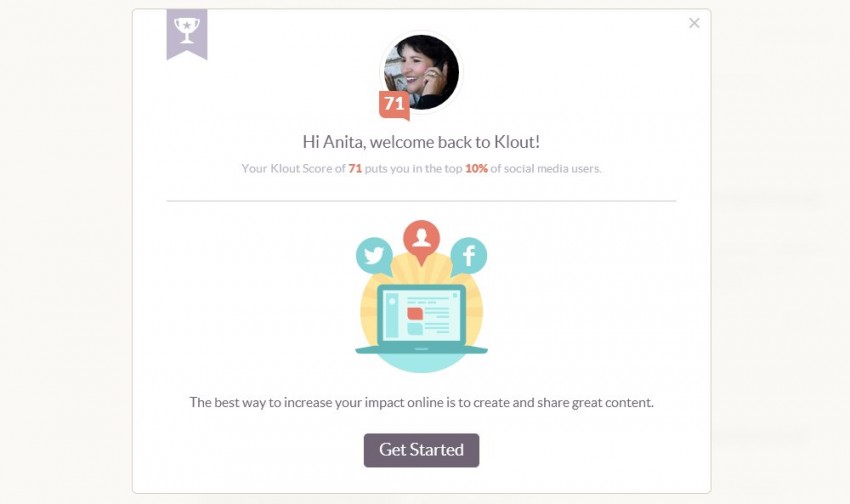 Klout, the app that attempts to measure your social media influence, just launched a new version.

The new Klout goes beyond just giving you a score and rewarding with “perks” (i.e, discounts and small freebies) for activity.  The new focus is on content — and sharing it.

“People always ask us, ‘How can I raise my Klout Score?’ While the math is complicated, the answer is simple: create great content. That said, we all know how hard it can be to consistently share stuff that your friends and followers react to (trust me, it gets even harder with a couple of kids in tow.)”

To address that point, Klout now offers a content stream. It displays articles that are trending in popularity or are interest-based. Snippets appear right in the Klout dashboard: 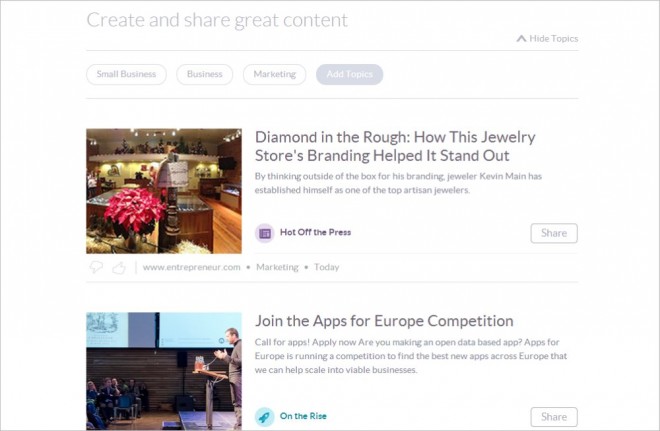 If you are not ready to share immediately, you can schedule a tweet to go out later.  A little calendar pops up to schedule it: 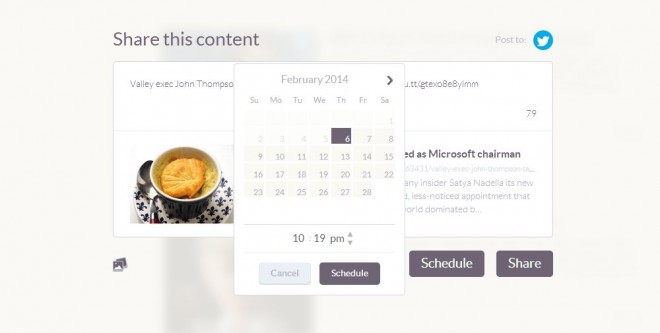 The new Klout (or #newKlout as it is being called on Twitter) is a mixed bag.

It is definitely nice looking.  The design is updated, fresh and clean.

And it’s got more to offer users.  The new Klout’s focus on content sharing delivers more of the “what’s in it for me.”

Klout needed to become more than an ego-scoring service measuring social media clout.  It was fun to see your Klout score at first – but only for a short while. Soon the novelty wore off. And it’s frankly demotivating for people who are new to social media.  Seeing a low score may motivate some, but for others it puts them off using Klout, especially if they don’t have much time to spend online.  They figure their scores will never get higher.

However, I can’t shake the feeling that Klout’s new content-sharing comes too late to the market.  Other sharing apps, such as Buffer and Hootsuite, have already become entrenched – certainly among business users. Hootsuite, for example, has 8+ million users.  Other sharing apps offer more features and functionality.

Klout “Perks,” where users with high Klout scores earn discounts and freebies, are still around.  There’s a certain novelty to earning a $5 McDonald’s coupon.  But is that kind of reward worth spending a lot of time at Klout to earn?   I see plenty of tweets about Perks, but it’s hard to imagine any long-term appeal to small business owners. Most of us have limited free time, and what little we have could be better used in other ways.

Another issue is that all the content feeds are big media publications.  That means the big keep getting bigger.  It doesn’t leave much room for independent bloggers or smaller news sites to get their content shared.  Klout needs to diversify and expand its content sources.

Some established Klout features seem to be missing in the new version.  Users are complaining on the Klout blog about not being able to find the friends list and the questions section, among other things.  Klout says they were “temporarily shelved” and will be back eventually.

Anita Campbell is the Founder, CEO and Publisher of Small Business Trends and has been following trends in small businesses since 2003. She is the owner of BizSugar, a social media site for small businesses.
22 Reactions
Leave a Reply Cancel reply
Subscribe
Follow @smallbiztrends
RSS LinkedIn Pinterest iTunes