LinkedIn Will Acquire Bright, a Job-Matching Site for $120 Million 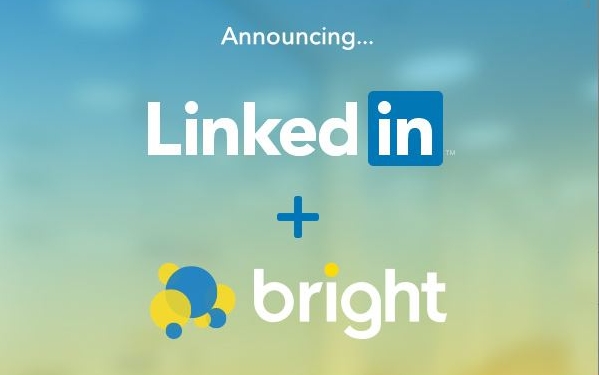 LinkedIn will acquire Bright, another site for job seekers and recruiters, for $120 million.

Bright is a job-seeking site that uses its unique scoring system to match employers with people looking for a job. Bright’s technology reviews the resume of a job seeker and assigns it a score. The idea behind Bright, according to its website, is to eliminate clutter for those hiring new employees. Rather than comb through countless applications and resumes, a company can use a person’s Bright score to whittle down the field of prospective hires.

Recode reports that the $120 million sale price includes $32.4 million in cash and the remainder in Bright stock. The report also notes that this is LinkedIn’s largest purchase of another company since it launched. This could be an example of the bigger company absorbing its fastest-growing competition.

There are about 277 million users on LinkedIn. LinkedIn already has a similar job-matching service for companies in its Talent Solutions feature. On the site’s blog, Vice President of Product Parker Barille writes that buying Bright allows LinkedIn to grow and its job-matching ability to improve:

“As we add more job listings over the next several years, Bright’s powerful matching technology will be integral to ensuring that the prospects we suggest to employers and opportunities we surface for prospects are increasingly relevant.”

Bright has been a popular destination since it launched the scoring system in June 2012. Since then, it has received more than 62 million unique visitors and nearly 63 million jobs have been posted there. The company has already raised more than $20 million in funding from Passport Capital, Toba Capital and angel investors, the company’s website says.

Eduardo Vivas, founder of Bright, said his company decided to join LinkedIn so it could apply the technology it created to a larger market. On his company’s blog, Vivas writes:

“We decided to join LinkedIn because of what we lacked – the ability to apply this technology across the entire economy. We share LinkedIn’s passion for connecting talent with opportunity at massive scale.”

Bright members and Hiring Solutions customers will still be able to access their information on the original Bright site until the end of February. When the sale is complete, “several members” of the Bright staff will join LinkedIn, according to the buyer’s announcement.