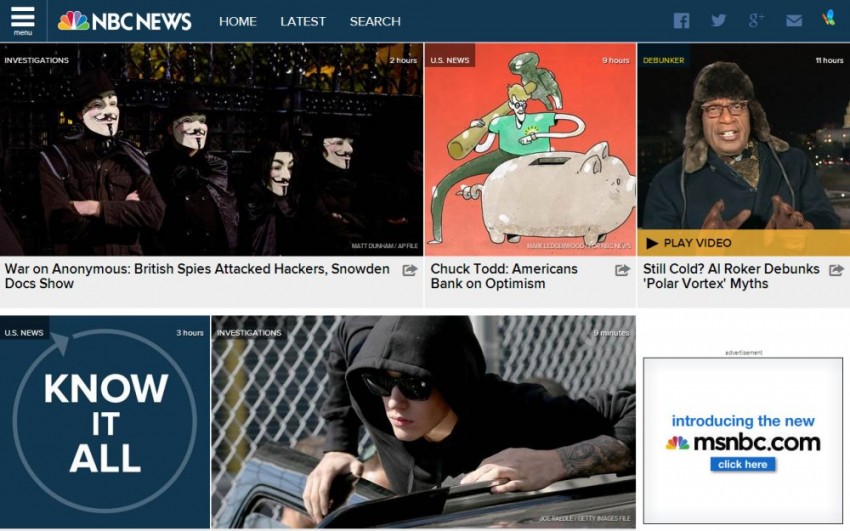 If you are a fan of the infinite scroll, you’ll love the new NBC News website that unveiled today. If infinite scrolls and content that seems to lack any organization drive you nuts, then you won’t be so impressed.

The new NBC News site homepage (pictured above) is heavy on images, light on text.  It’s tablet friendly and in the words of Deborah Turness, President of NBC News:

“The new site doesn’t feel like TV content chopped up for the web — it is actually born of a seamless collaboration between TV and digital.”

I’ll tell you another thing it feels like — more like a blog than a typical news site. NBC says it has done research  into digital news habits to come up with the new design:

“This marks the website’s first significant design change since NBC News acquired full control of its digital properties in July 2012. After becoming independent from the joint venture with Microsoft, NBC News conducted extensive research into digital and mobile news consumption habits, and then designed an innovative, mobile-first new format that caters to those needs and behaviors.”

Much of the navigation is accessed through a pull-out menu from the 3 horizontal bars up in the left corner (a la Android type nav menus you find on mobile devices).

It’s definitely a pretty site, but I’m going to be contrarian on this.  It’s great for random browsing of news and wasting time.  But for business people, if you’re busy and want to get to the news that matters to YOU, those types of designs are a nightmare to sift through.  I like a site where you can find what you’re looking for.

Maybe I’m an outlier.  But I have a feeling that a couple of years from now we’ll see site design backtracking from these “browse and scroll” types of designs.

However, if you are a general news organization catering to a wide audience, many of whom are consumers, it might be just what you want — something where people jump around to this and that news article almost randomly.

The company says it’s really about storytelling, and that the Digital News arm of NBC News is creating original content just for the site (versus reheating the TV news) and presenting it in a digital friendly way.  NBCNews.com touts its “Stories that take many forms — from standalone images, tweets, or animated gifs; to lists or one-line summaries; to fully produced articles marrying text, video, and photos.”

NBC News should get kudos for being cutting edge and delivering a site that is fast and full of eye candy.  It’s certainly entertaining.

It’s just not necessarily all that useful for those trying to find content in an organized way.

Anita Campbell is the Founder, CEO and Publisher of Small Business Trends and has been following trends in small businesses since 2003. She is the owner of BizSugar, a social media site for small businesses.
59 Reactions
Subscribe
Follow @smallbiztrends
RSS LinkedIn Pinterest iTunes