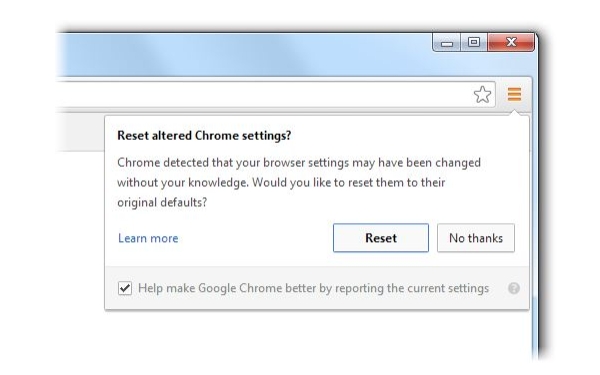 The Chrome browser has been updated by Google, in an effort to thwart phishers who try to hijack the browser using malware. Even though a reset button was added to Google’s settings last year, the search giant clearly felt that it wasn’t enough. Apparently browser hijackings are on the increase, and something else was needed to reinforce Chrome’s defenses.

Now, if the browser detects that your settings have been changed without your knowledge, a box will pop up asking you if you want the browser settings to be reset (image above).

Well….not quite. Ironically, some users on Arstechnica have pointed out that such a box is the sort of thing they wouldn’t click on, if it suddenly came up on the screen. How do they know it really came from Google? Isn’t this the sort of thing that Google is telling everyone not to do? One commenter explained:

“If I saw that popup I’d worry that it was malware masquerading as Chrome and be very leery of clicking it.”

Another commenter on the site added:

“That looks like the kind of message I tell my mum to avoid, or to talk about with me before she does anything. Not sure if I’d bother teaching her how to identify it, as I’d assume someone will develop malware to closely resemble it. May not be as useful as intended.”

The second commenter makes a valid point. What’s to stop a malware maker from making a spoof Chrome warning box, which would install malware?

If you do decide to click that box, you will have to remember that all of your extensions, themes, and Chrome apps will be deactivated. They can be manually reactivated one by one, by going into your settings, so don’t worry – nothing will get uninstalled.

It was reported last month that malware makers were buying up well known and popular Chrome extensions, and inserting malicious advertising code into them. Not realizing that the extensions were now the property of someone else, users kept on installing them. One high profile person on the Web who was particularly stung was Amit Argawal who runs the highly popular tech blog Digital Inspiration.

Mark O'Neill is a staff writer for Small Business Trends, covering software and social media. He is a freelance journalist who has been writing for over 25 years, and has successfully made the leap from newspapers and radio onto the Internet. From 2007-2013, he was the Managing Editor of MakeUseOf.com.
4 Reactions
Leave a Reply Cancel reply
Subscribe
Follow @smallbiztrends
RSS LinkedIn Pinterest iTunes