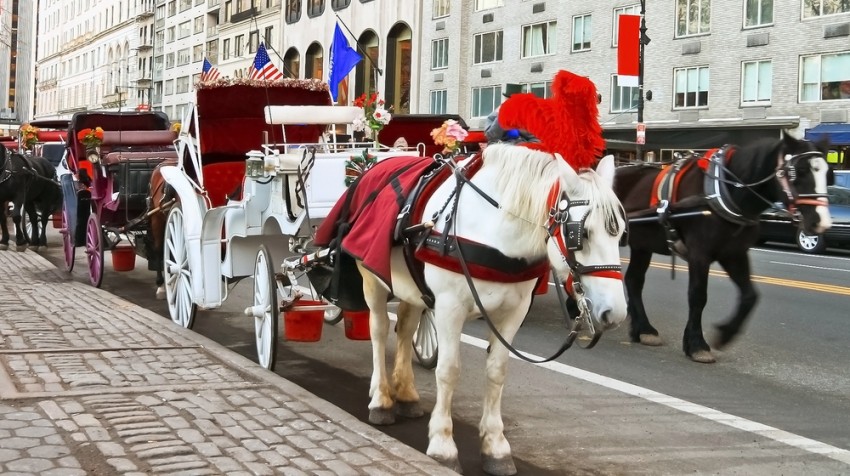 A controversy in New York City is pitting small carriage owners against the city and more specifically, newly elected Mayor Bill de Blasio. De Blasio has vowed to eliminate horse drawn carriages in Central Park, a long tradition and an ecosystem supporting many small business owners including owners of the carriages, horses and stables. But for the moment, city council seems to have stopped the mayor in his tracks and the issue has yet to even make it to the council’s agenda.

Opponents of the carriage rides, including animal rights groups, insist the horse and carriage trade is bad for the animals. They say the horses are denied proper pasture, are exposed to exhaust fumes and are over worked, Treehugger reports.

But Stephen Malone, spokesman of the Horse and Carriage Association of New York says the carriage trade has supported many horse and carriage and stable owners down through the years. In a CNN editorial he writes:

“My father stumbled upon the horse and carriages on Central Park South and hit the jackpot. He was a third-generation blacksmith and went to work immediately as the stable hand and blacksmith to the carriage trade. He would work all day, fixing problems with the carriages and then shoeing horses.

The stable owner allowed him to drive a carriage on weekends to earn extra pay. He worked like this until 1967, when he purchased his first carriage. This is the origin of my family tradition. The horse and carriages have put the bread and butter on my family’s table since 1967 and I intend on keeping it that way for years to come.”

What’s more, those in New York’s horse and carriage industry insist charges that horses are being cruelly treated are wrong. And even Treehugger admitted in an earlier post that charges of neglect or abuse seem unwarranted.

The mayor has proposed replacing the horses with environmentally friendly “vintage” style electric cars and offering them first to former carriage owners as compensation for a ban. But no one can imagine tourists paying $50 for 20 minutes or $130 for an hour to ride in a car in New York City.

But it’s more than just the livelihood of so many small carriage, horse and stable owners that’s at stake. The industry employs 300 people and generates about $19 million annually for the city’s economy.

Like so many other small business owners, those involved in the horse and carriage trade have added substantially to the fabric of their community. Defenders of these business people say the proposed ban isn’t about the welfare of the animals. It’s about politics and influential animal rights activists who contributed to de Blasio’s campaign.

They have vowed to fight city hall to preserve businesses that continue to thrive in New York City that they believe make their community a better place.