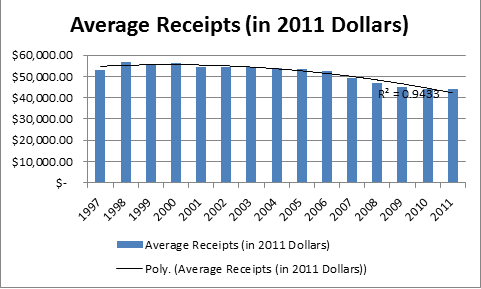 The number of non-employer businesses – companies that have at least $1,000 in annual sales and pay federal income tax, but have no paid workers – continues to grow, increasing by 1.7 percent in 2011, the Census Bureau’s latest estimates show.

Despite a small decline during the depth of the Great Recession, the number of non-employer businesses has been on a long-term upward trend, rising almost continuously since the late 1990s. Between 1999 and 2011, the count of non-employer firms increased by 39.2 percent, and now totals 22.5 million companies.

The rate of growth of non-employers has far exceeded that of employer businesses (see the Small Business Administration’s picture here). As a result, non-employers now account for four-out-of-every-five U.S. companies, up from three-in-four back in the late 1990s.

Before we get too excited about this growth in entrepreneurial activity, we need to consider what non-employers look like. While non-employers do include some corporations and partnerships, the vast majority – 87 percent according to Census estimates – are self-employed people operating unincorporated businesses as sole proprietors. Many of the companies, the Census Bureau believes, are sideline businesses.

Despite their large numbers, non-employer businesses have relatively little economic impact. The Census Bureau estimates that, collectively, they account for only 4 percent of business receipts, 7 percent of capital spending, and (by definition) no employment. Their average sales are below $45,000 per year.

Americans have been forming non-employer businesses at a rate far greater than these companies have been increasing their revenues, leading the average sales at non-employers to shrink, particularly in inflation-adjusted terms. Receipts at the average non-employer peaked in 1998 and have declined 22.2 percent since then. (A quadratic term fits the pattern in the data pretty well, as the figure above indicates, suggesting initially rising and then falling average revenue.)

When the Census Bureau releases the 2012 non-employer business data in April, it might show that their average sales have finally stopped shrinking. But my bet is that the number of non-employers has continued to grow faster than their (inflation-adjusted) revenues.

Image Source: Created from data from the U.S. Census