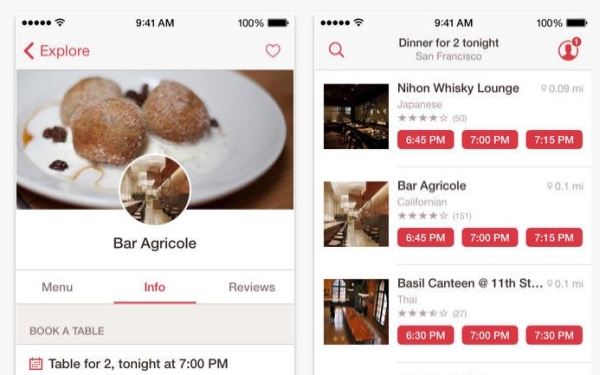 OpenTable has introduced a new feature to let you pay your restaurant check via the company’s mobile app. The change reflects a growing trend in which retailers give their customers as many options to pay as possible.

This new feature is an expansion of the app’s original intent. OpenTable allows diners to reserve a table at a favorite restaurant. But the app also provides basic information on local restaurants, including the average price of a meal and the cuisine offered. Diners can provide a review of participating restaurants. But currently, the app is only available to iPhone users.

“First, OpenTable made it simple to book a restaurant reservation at any time of day or night with just a few clicks. Now, we’re pleased to announce that it will soon be just as easy to pay for your meal. Rather than waiting for a check or, worse yet, being late for the theater, with the new OpenTable payments feature, you will be able to tap to pay – and be on your way.”

Deorah says the check payment option is only available to a group of users in San Francisco at the moment during an initial testing phase. But in the coming weeks, Deorah says more and more current users will be provided access and that OpenTable also intends to offer an option allowing interested users to request access.

In a comment on the blog post, Caroline Potter, OpenTable’s Chief Dining Officer, says the company is also planning an Android version of the OpenTable app after the pilot program for the new payment feature is completed.

In a recent post on Venture Beat, consultant and investor Rakesh Agrawal, who says he owns stock in several potential competitors of OpenTable, insists the app has a considerable advantage. Agrawal writes:

“OpenTable also has several big business advantages: it already has relationships with more than 28,000 restaurants. According to its fourth quarter 2013 financials, OT has seated a cumulative total of 110 million diners via mobile; mobile accounted for 40 percent of seated diners in Q4 2013.”