The Power of Optimism: 91 Percent of Entrepreneurs Confident 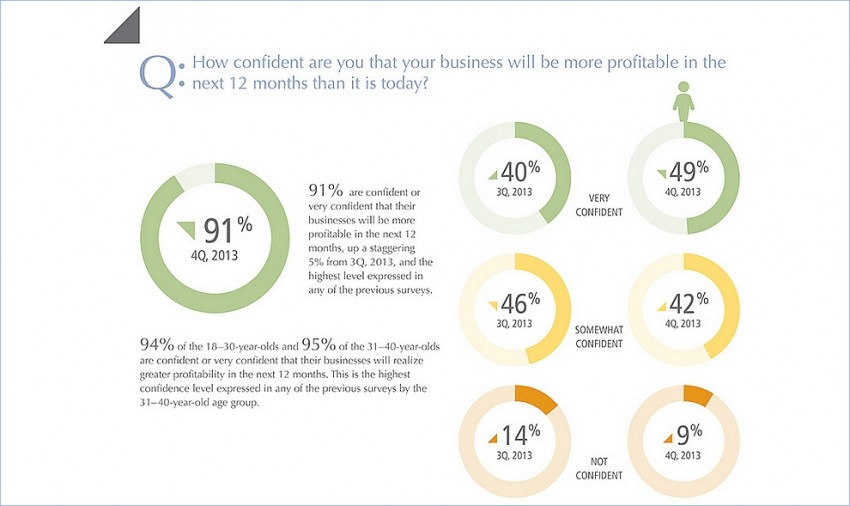 Startup entrepreneurs have to be optimistic in order to overcome the challenges of starting a business. So in a way, it really isn’t a surprise that the majority of entrepreneurs surveyed are optimistic about the year ahead.

That confidence seems to come from within entrepreneurs – not necessarily from conditions around them.

The survey, released recently, says a whopping 91% of entrepreneurs are confident that their businesses will be more profitable in the next 12 months. Of those, 49% are “very confident.”  The survey was conducted on behalf of the Ewing Marion Kauffman Foundation by LegalZoom, based on numbers from the the fourth quarter of 2013.

Many entrepreneurs have an unstinting faith in themselves and their ability to start and grow a business, regardless of the conditions around them.  Yes, they may be pragmatic and recognize that the economy and market conditions might not be ideal.

But when are conditions ever “ideal?”

Some household name businesses were launched and built during slow economic times — Microsoft, Revlon, FedEx just to name a few.  Even during slower economic times, customers still buy.  The economy goes through cycles.  There will always be times of slower growth and times of faster growth.

If you are waiting for conditions to be just perfect, you may wait forever.  While one entrepreneur is making plans for when things will be “just right,” another is out seizing the day and grabbing that opportunity.  The economy isn’t ever going to be just right.  Instead of waiting for the economy to “get better,” be a leader and be part of making it better by seizing and building opportunities.  Successful commerce drives the economy.

And that’s what the entrepreneurs in this survey seem to know instinctively.   It’s about the power of optimism and belief in their businesses.

A total of 1,375 entrepreneurs responded in the survey, from startup entrepreneurs who formed their business entities in the previous six months.  The Kauffman Foundation is known for its support of startups.  LegalZoom provides incorporation filing services. The company had been planning to file an IPO, but withdrew that in early 2014 and instead announced plans to sell a large stake to Permira, a European private equity firm.