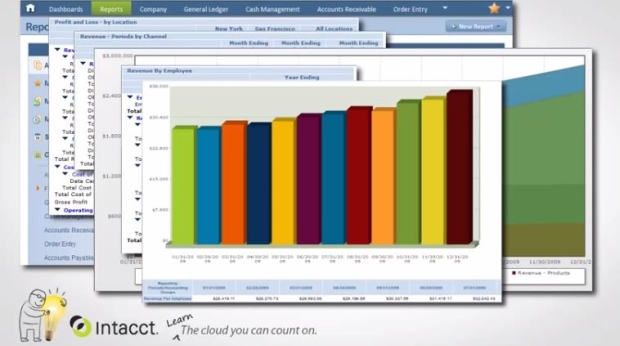 Cloud accounting software company Intacct has just raised $45 million. The company says it will use the money to improve its product and do more marketing.

That may be a good idea. If you haven’t heard of the company yet, you’re not alone.

Intacct is still relatively young and small, used by a little more than 7,300 customers. Those customers range from accounting firms to tech companies and even non-profits and faith-based organizations.

The cloud software provider positions itself as a replacement for QuickBooks and similar on-premises accounting software for larger companies — like Sage and Oracle.

With prices starting at $400 per month, Intacct is obviously targeting the larger end of small businesses and midsize companies.

Though small, the company experienced some rather impressive growth last quarter. Intacct reports the business saw a 40 percent increase in the number of bookings compared to last year. The company also says it experienced almost 60 percent growth in new customer acquisition for the quarter ending December 2013.

In an official announcement on the Intacct website, CEO Robert Reid said:

“As the fastest growing mid-market cloud financial software vendor, Intacct has already established itself as a major player in the largest business application software segment. Our continued success in the industry, along with increased market share, has attracted additional capital for the company. This new round of funding will enable us to further accelerate our growth, drive new product enhancements, and reach into new markets.”

Like Xero, the San Jose company is focused on promoting its cloud-based software as a service model as distinctive from older on-premises systems.

In the release, Intacct spells out this differentiation:

“Intacct and its channel partners continue to see the largest growth coming from companies looking to switch off of outdated on-premises financial systems from Microsoft and Sage to Intacct’s modern, cloud financial software. These companies have struggled with software designed well over 25 years ago (pre-Internet) that requires multiple add-ons, extra hardware, costly expert customization, and ongoing IT support just to keep up with their constantly changing business needs.”

Listed among the companies customers are a variety of firms including Wikipedia, Signal 88 Security, Meetup and Grubhub