Has the Recovery in Small Business Lending Stalled? 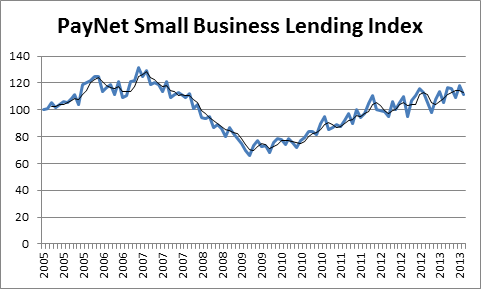 From May 2009 to October 2013 the Thomson Reuters/PayNet Small Business Lending Index rose 78 percent. But, in November 2013, the index dropped 5.4 percent. Does the recent decline indicate an end to the recovery in small business credit?

The data suggest not. The recent drop probably reflects the index’s volatility. As the figure above shows, smoothing out the measure’s volatility with a one-quarter moving average (shown by the thin black line) suggests only a slight moderating of the upward trend that began in late 2009.

Similarly, the Gallup/Wells Fargo Small Business Survey revealed no change between the third and fourth quarters in the fraction of business owners who expected credit to become more difficult to obtain over the the next 12 months, and an increase of two percentage points in the fraction who expected it to get easier.

The number of small business owners reporting difficulty getting credit has not increased substantially in recent months. While the fraction of NFIB survey respondents who said that loans were more difficult to get was one percentage point higher in December than in November, the most recent number was also two percentage points lower than in December of 2012.

Finally, only two percent of small business owners told the NFIB that borrowing was their top problem.

Responses to the Gallup/Wells Fargo Small Business Survey tell the same story. In the fourth quarter of 2013, the fraction of owners that reported difficulty getting credit over the previous 12 months was 6 percentage points lower than a year earlier, while the fraction reported ease increased by 4 percentage points.

While the trend toward improvement in small business credit markets doesn’t appear to have stopped, conditions remain very different than they were before the Great Recession. Fewer small businesses are borrowing than once did. The 30 percent of small business owners reporting in December that they borrow regularly was only two percentage points higher than the record low, and a far cry from the 37 percent that borrowed regularly in April 2007.

Banks are a far less common source of small business credit than they were before the economy turned south. According to data from the Federal Deposit Insurance Corporation, the value of outstanding commercial and industrial bank loans of less than $1 million was an inflation-adjusted 21.4 percent lower in June 2013 than in June 2007. And the number of loans was down 2 percent.

Small business loans also are more likely to be secured by collateral now than before. Federal Reserve Survey of Terms of Business Lending shows that 84 percent of the value of loans under $100,000 was secured in 2007. In 2013, that fraction had risen to 90 percent.

While the recent recovery in small business lending does not appear to have ended, small business credit conditions remain very different than before the financial crisis and Great Recession. Neither of those patterns is likely to change soon.

Scott Shane is A. Malachi Mixon III, Professor of Entrepreneurial Studies at Case Western Reserve University. He is the author of nine books, including Fool's Gold: The Truth Behind Angel Investing in America ; Illusions of Entrepreneurship: and The Costly Myths that Entrepreneurs, Investors, and Policy Makers Live By.
7 Reactions
Leave a Reply Cancel reply
Subscribe
Follow @smallbiztrends
RSS LinkedIn Pinterest iTunes