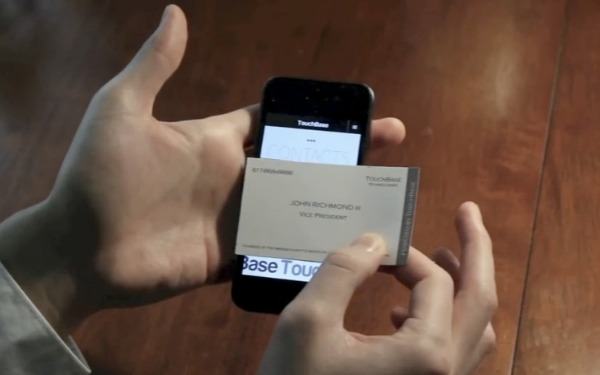 The way people network may be changing. Swapping business cards has been a mainstay of small business networking. Sites like LinkedIn and a number of others have offered new ways to connect with industry professionals.

But through it all, traditional paper stock cards have stuck around. One startup, however, is proposing a new option that doesn’t aim to replace business cards, but to enhance them instead.

TouchBase Technologies, a startup out of MIT, is pitching a new business card embedded with conductive ink. The company says the technology allows users to transfer their information by tapping the card against a smartphone.

But the new cards would contain more information than what you might find on a typical business card. It might include, for example, digital information, including links to your profiles on sites like LinkedIn and Twitter. Even digital photos, videos, contact and biographical information could be transferred to a contact’s smartphone, company representatives say.

Here’s the idea behind the cards the company’s CEO shared with Mashable:

“We realized that business cards really aren’t going away. It’s a critical part of business etiquette…This is a way to keep the look and feel of your card, but when you want to share more information, you have that ability.”

Though the company still has some kinks to work out, such as creating cards that are flexible enough to transfer information to phones with cases, the concept is an interesting one. In-person networking is not going away. But there may be ways to improve the process with technology .

Whether TouchBase can make the cards convenient and inexpensive enough to catch on with business owners remains to be seen. To do that, the app will have to run on as many devices as possible, and the cards will have to be easy to obtain and use.

Will TouchBase cards, or ones like them, actually replace traditional business cards?

Maybe not. But smartphones and social media have greatly changed the way we communicate. So at some point it would make sense for the plain old business card to catch up and integrate those features.

The company is currently running an Indiegogo campaign to fund the project. The pilot version of the product will only include apps for the iPhone 5, 5S, and 5C. But TouchBase plans to add other native iPhone and Android apps in the future.