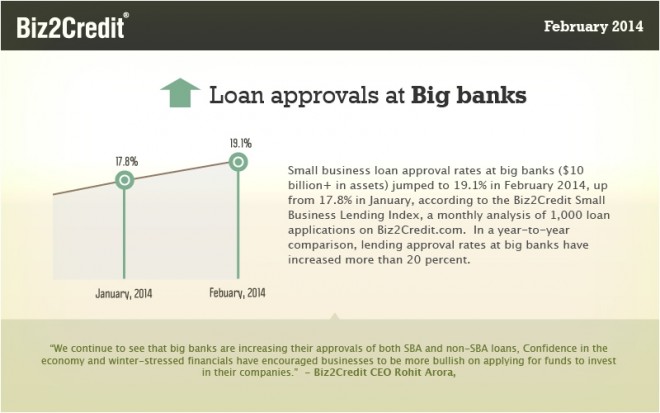 As the economy continues to improve, big banks are returning to what they are supposed to do: Make loans and make money.

During the “credit crunch” of 2009 – 2011 when the largest financial institutions closed the spigot on small business lending, approval rates sunk to single digit percentages at many big banks. During this dry period, credit unions and alternative lenders filled some of the void and small banks, in particular, were the most willing to lend.

Still, even the smaller regional and community banks granted less than half of the applications they received.

As the accompanying graphic shows, lending has rebounded among all categories of lenders in recent months. In fact, according to the most recently issued Biz2Credit Small Business Lending Index (Feb. 2014 figures), loan approval rates at banks that have $10 billion+ in assets jumped to 19.1%. This is by far the highest figure since we began the Index in January of 2011.

Lenders such as Citizens Bank, TD Bank, and Union Bank, for instance, have aggressively marketed their small business lending products. Recently, Bank of America and Citibank have reported that they are making millions of dollars in loans to small companies.

February 2014 saw a 7 percent increase over January’s approval rate (17.8%) and the figure represents a 20 percent leap in a year-to-year comparison of lending approval rates at big banks.

Why is this Happening Now?

Small business lending stalled during the “credit crunch” of 2009 – 2011. However, banks make money by making loans. A major catalyst is the fact that the economy has rebounded. Of equal importance is that banks are recognizing that small business lending is a profitable part of their portfolio. In fact, banks are trying to regain lost ground because alternative lenders stepped in and were willing to supply funding at a time when banks were stingy.

Big banks are improving their technology and enabling small business owners to apply for loans online. This improves the efficiency of the process. Additionally, big banks are taking advantage of their brand names and their marketing dollars. People tend to go with the names they know. As the banks returned to the marketplace, word has spread among small business owners that the chances of getting a bank loan have increased substantially. We will never see approval percentages of 40 percent again, but things have improved greatly.

During the recession, big banks began to ask for three years worth of financial data, instead of just two years worth, when small business borrowers submitted applications. From 2009 – 2011, business performance was weak. However, as the economy picked up, small companies fared much better. Thus, big banks viewed small business loans as less risky.

In a recent Biz2Credit analysis of 10,000+ small companies, we found that the average credit scores rose significantly last year. For instance, two years ago, the figure for women-owned companies was 592, while in 2013, it rose to 610. Meanwhile, the scores of male-owned companies similarly rose. When business credit scores rise above 600, banks are more willing to lend.

3. Confidence in the Economy

During tough economic times, entrepreneurs fret about taking on debt to fuel growth. Since the fortunes of many small companies have improved, their owners are again willing to accept risk. Typically they only do so when they feel confident about the economy. Already, retailers are ordering their 2014 holiday season inventory.