Hey Nightclubs, You Need To Be Online 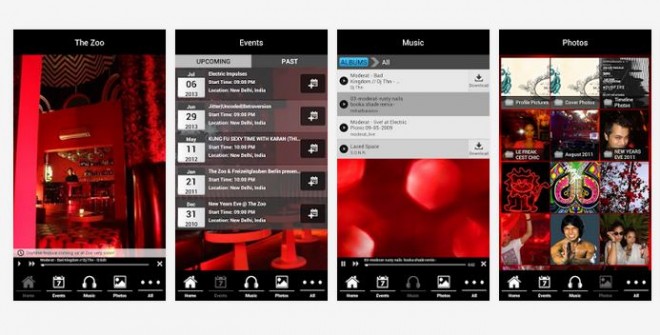 The social, mobile Web has drastically changed how businesses connect and reach out to people and communities. It has helped create overnight sensations or successes out of smaller businesses. In industries such as hospitality and entertainment where word-of-mouth publicity plays a major role, social and mobile apps have made it possible and affordable for small businesses and even individuals to have a large following.

SnapLion was founded in 2011 by CEO Nikhil Sama with his three friends, Tapan Raj, Rohan Gupta, and Aditya Kapoor. Prior to SnapLion, Nikhil was Director of Rocket Internet, an early stage technology fund, a strategy consultant at Bain in Chicago and a software developer at Cisco and HP.

Rohan is a veteran of UI, UX and New Media studies at the Academy of Art College in San Francisco and a Computer Science major from St. Stephen’s College in New Delhi.

The Early Days: How SnapLion Started

Tapan’s music band ‘Midival Punditz’ had over a million fans worldwide, but when he wanted to build an app for it, he was dismayed to discover that getting an app built for musicians was cumbersome, expensive, time consuming, and technically challenging. Tapan reached out to Nikhil and Rohan. Together, they created a ‘do-it-yourself’ platform for creating apps and called it SnapLion.

Soon restaurants, nightclubs, and other businesses also started reaching out to SnapLion to create apps for their businesses. Some of its key customers include Buddha Bar, musician Anoushka Shankar, Hotel Radisson Blu, and Smokin’ Joes Pizza with 90+ locations across India. The unique selling point for SnapLion is that just with content, like photos, videos, text, menus, promotions, etc., and without any coding skills, anyone can create their own app in less than an hour.

SnapLion with its social, mobile apps lets customers and fans engage with each other and with the business or artist. It helps businesses inform customers of events – from special appearances and menus to celebrations like Christmas and New Year’s Eve parties – or keep them updated about promotions and discounts.

When SnapLion was launched, their main competitor was Mobile Roadie whose clientele included top brands and celebrities. Their apps were slick but expensive at $500 per month onwards. At the lower end of the market, SnapLion’s competitors included MobileConduit, iBuildApps.com, AppMakker.com.

SnapLion positioned itself as a provider that delivered superior quality apps at a substantially lower price point. It has an average end-consumer rating of 4.5/5 and its pricing ranges from $35 per month to $1,000/month for complex apps with large downloads. SnapLion also offers a “Hire a Pro” service, where a SnapLion Pro would create an app for the client for a small fee.

The custom iPhone and Android app it created for a restobar in Pune called High Spirits delivered ROI of 10 times the monthly cost in customer revenue. Push notifications about the bar’s deals, offers, celebrations, happy hours, etc., alone accounted for 71% of increased footfalls. It also offered reservation facility, proximity alerts, and loyalty points. Its fan wall feature helped the customers interact with each other and the High Spirits restobar, through comments and pictures on a platform controlled by the restobar.

A survey from eMarketer shows that 89% of restaurants have adopted social media in 2013, up from 77% in 2012. More than 50% had a mobile site and nearly 30% had a mobile app. The report also shows that mobile is giving location-based marketing a major boost, and it has a special value for the restaurant and bar sector, a sector that is highly trend-based and is seeing increased adoption of social media and mobile Web.

There are more than 70,000 nightclubs in the US and 200,000 globally. At least 100,000 restaurants have food delivery services via JustEat, GrubHub Seamless, and FoodPanda. All this translates to a huge market for SnapLion to tap into.

Sramana Mitra is the founder of One Million by One Million (1M/1M) initiative, a virtual incubator that aims to help one million entrepreneurs globally to reach $1 million in revenue and beyond. She is a Silicon Valley entrepreneur and strategist who writes the blog Sramana Mitra On Strategy.
6 Reactions
Subscribe
Follow @smallbiztrends
RSS LinkedIn Pinterest iTunes