Get Extraordinary Results By Doing “One Thing” 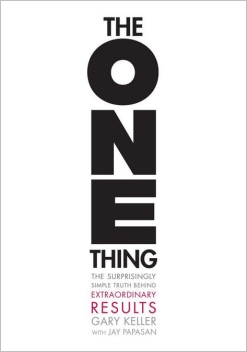 In a world where we’re constantly bombarded with alerts, messages, phone calls, and the urgency to fulfill each role within our lives, it becomes overwhelming to stay on track towards our goals of producing great results.

Over the years, we’ve learned that in order to be successful in all areas while having only 24-hours in the day, that we should multitask. As a result, we begin piling on everything we’re required to do with the thought that we’re going to succeed, when in reality, we don’t.

If this type of lifestyle sounds familiar to you, then The ONE Thing: The Surprisingly Simple Truth Behind Extraordinary Results by Gary Keller with Jay Papasan is the next book you should pick up.

Keller and Papasan do a great job at explaining how dividing your focus among multiple tasks is a disservice. Instead, you should find the ONE thing that you could do now that would deliver extraordinary results in multiple areas of your life.

With many analogies and personal stories, Keller and Papasan make it easy to relate and identify the behavior we enlist with the assumption that we’re being efficient – when we’re really not.

The book is broken into three parts, starting with the dispelling of the “multitasking” myth, then revealing the truth on how a simple path can produce productivity, and ways we can implement the concept of The ONE Thing in our lives. Keller and Papasan used real life examples and studies showing how their theory has been proven successful.

With little effort being placed on your ONE thing, the positive results are guaranteed to trickle over to all areas of your life.

Before diving into each  section, Keller and Papasan start out by asking:

“What’s the ONE Thing you can do this week such that by doing it – everything else would be easier or unnecessary?”

Looking back at their own lives, they were able to notice how they found huge success after narrowing down their concentration and focused on simply, ONE thing.

PART 1 The Lies: They Mislead and Derail Us

Keller and Papasan begin this section by listing, then detailing six lies that are keeping us from being successful. We believe that everything we do or set out to accomplish matters equally, and that multitasking is the way to go. With great detail and research, they discovered that multitaskers make more mistakes than non-multitaskers.

“When you try to do too much at once, you end up doing nothing well.”

With this simple explanation, I was immediately able to relate and think about the occurrences of a simple task of trying to read a book while watching a TV show. Neither task was receiving my full attention, so nothing was accomplished at all.

This example alone can be applied to many personal and professional situations we find ourselves in where we’re trying to “kill two birds with one stone” in order to save time – but the result turns out to be counterproductive.

PART 2 The Truth: The Simple Path To Productivity

“Anyone who dreams of an uncommon life eventually discovers there is no choice but to seek an uncommon approach to living it.”

This section allowed us an opportunity to learn how to form the right question that would lead us to identifying our ONE thing. Keller and Papasan did an excellent job at detailing how to do this, which included performing the necessary steps to break down our big goals into small actionable steps.

We either tend to think big or small, and broad or specific. I loved how they iterated how its okay to think big – but be sure that our path is a combination of small steps.

PART 3 Extraordinary Results: Unlocking the Possibilities Within You

After learning what The ONE Thing theory consisted of and how we could begin to think in terms of identifying our ONE thing, the last part of the book was focused on application and implementation.

With tips such as goal setting and time blocking, Keller and Papasan encourage the reader to focus on following a path of mastery:

“To many people reach a level where their performance is “good enough” and then stop working on getting better. People on the path to mastery avoid this by continually upping their goal, challenging themselves to break through their current ceiling, and staying the forever apprentice.”

To be successful in life as well as business, The ONE Thing is never-ending. According to Keller and Papasan, we must always ask ourselves, “What is the ONE thing I can do to achieve my small goal, in a specific time, that will have a positive effect on achieving my big goal?

This book was not only great for the ambitious and overachieving professional, but also for anyone who wishes to become a better individual in their personal life as well.