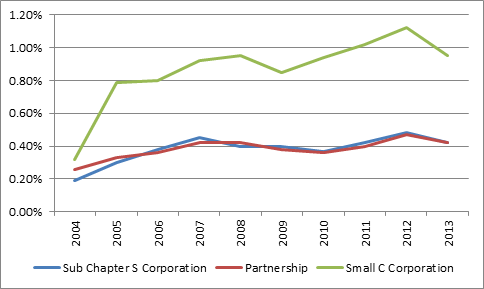 Before you get too excited about this drop, however, take a look at the rate in historical context. The current business audit rate of 0.61 percent is considerably higher than the 0.36 percent rate that prevailed in 2004.

Some have argued that belt tightening at the IRS is behind the reduction in audit rates. Since 2010, the tax authority’s budget has been steadily reduced, as Congress has sought to get the federal deficit under control. In response to declining resources, the agency has reduced its enforcement workforce from 22,710 employees in 2010 to 19,531 in 2013.

These observers are betting that the fraction of small businesses audited will continue to decline this year because Congress lowered the IRS’s funding by 5 percent as part of its 2014 budget deal.

However, I’m not so sure that budget cuts are behind the recent decline in small business audit rates. Between 2010 and 2012, the IRS cut its tax enforcement workforce by 8.9 percent, but the audit rate on small corporations, S-corps and partnerships all increased, with the overall business audit rate rising from 0.58 to 0.71 percent.

Budget cuts don’t require the agency to lay off employees involved in enforcement. The tax authority could maintain the size of its tax enforcement workforce and cut its budget elsewhere. Or the IRS could reduce individual or big business audit rates to maintain the level at which it examines small businesses.

Given the tax agency’s belief that small business owners are responsible for a sizeable portion of the tax gap – the difference between taxes owed and taxes paid – the IRS seems unlikely to cut the small business audit rate considerably this year. Reducing the number of small business examinations would likely lower tax collections more than would a corresponding reduction in the number of individual audits.