Who is “ExMediaMan” and Why Are So Many Following Him on Twitter? 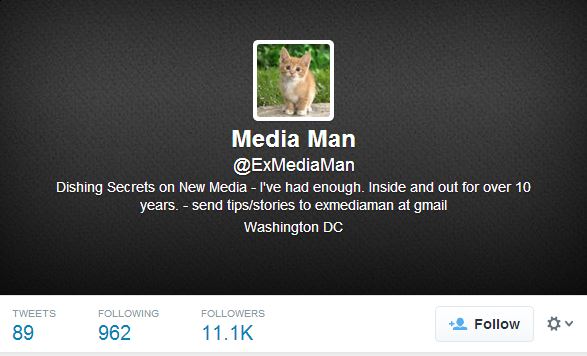 So who is “ExMediaMan” and why are so many suddenly following him on Twitter?

He’s been called “a must follow” for salacious Tweets like this about the online sites he’s supposedly worked for.

The secret to all the sites I worked at was one thing: @reddit

And then there are pithy little tweets like this as well:

Sites are no better than Herbalife, relying on a constant stream of naive young people. What’s that called again? OH, right Ponzi Scheme.

Oh, who could resist!

The anonymous Twitter user is becoming a phenomenon. He’s posted some razor sharp insights that (if true) expose the worst of new media sites. He claims to have worked for many of them including: Huffington Post, BuzzFeed, Gawker, Daily Mail Online and The Atlantic.

With more than 11K followers already after tweeting for only five days, the reception has been pretty amazing.

There hasn’t been this much excitement and speculation since 2007 and the so-called “Fake Steve Jobs” phenomenon. Forbes Senior Editor Daniel Lyons was eventually identified as the author of The Secret Diary of Steve Jobs.

But not until he had posted to the satirical blog for almost a year. All the while, readers remained glued to the site, many trying to guess the author’s identity.

In fact, Lyons himself confessed he was stunned how long it had taken for someone to unmask him.

ExMediaMan claims to be speaking as an insider at many of the largest and best known new media sites today. He is dishing out what he claims is a ‘fly on the wall’ perspective of what goes on in their editorial and business offices.

Of course, as The Daily Dot points out, we still don’t know whether the mysterious ExMediaMan is who he says he is. In fact, we don’t know who he is at all.

But for now, he is certainly driving social engagement and drawing plenty of followers.

Next, people will be trying to guess ExMediaMan’s identity just like they did with the “Fake Steve Jobs.” But in the meantime, his followers will likely continue to increase. And all will watch his Twitter account with anticipation for the next zinger.