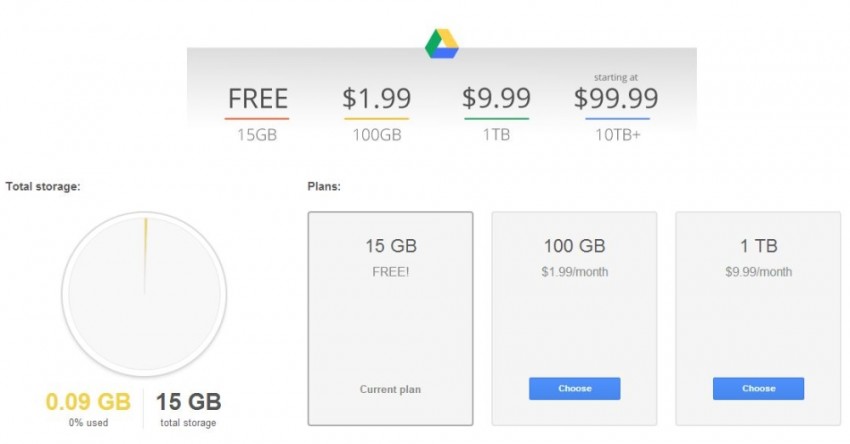 There was a time when cloud storage was seen as a passing fad, not destined to last long. But in fact, the opposite has happened, with everyone embracing it for their files, and shunning the computer hard-drive. And now, online storage costs are plummeting fast, which is good news for businesses.

There’s no better example of this than Google’s recent announcement that it’s slashing the cost of its Drive storage. The price for 1 terabyte of data dropped from $49.99 a month to just $9.99 a month. (No, that is not a typo.) 100 gigabytes went right down to $1.99 a month, which is definitely affordable on any budget.

As ReadWrite comments, a whole terabyte of data would have been unthinkable less than a decade ago. Just the very idea of it would have been unbelievable or laughable. But now Google is offering you exactly that for a mere $10. And Techcrunch points out that Google is probably offering these prices to get people onto the Drive platform where its productivity apps reside.

This, of course, puts a serious squeeze on rivals such as Dropbox, OneDrive, and Box. Until Google’s announcement, OneDrive was barely in the lead, price-wise, ahead of the other services. Now it has been caught wrong-footed, just weeks after the rebranding of the service formerly known as Skydrive.

If your business needs storage space in the cloud, then your options continue to expand. There are a whole variety of cloud storage options to consider. And lower costs aren’t the only benefit to be looking out for. For example, companies like Dropbox are rapidly enhancing their features with the ability to manage accounts across multiple devices. There’s also the option to support multiple accounts easily for business and personal use.

While these features are extremely useful, Dropbox’s cause isn’t helped by its high prices, in comparison to its rivals. CNET argues however that it is only a matter of time before the other cloud services respond to Google’s business strategy of slashing prices to pennies.

So if you think that your favorite cloud storage service is currently too expensive, then be patient. You may see that price tumbling before you know it. And often, paying the whole year up-front gives you a further 15%-20% off. They’re practically giving it away.

Mark O'Neill is a staff writer for Small Business Trends, covering software and social media. He is a freelance journalist who has been writing for over 25 years, and has successfully made the leap from newspapers and radio onto the Internet. From 2007-2013, he was the Managing Editor of MakeUseOf.com.
23 Reactions
Subscribe
Follow @smallbiztrends
RSS LinkedIn Pinterest iTunes