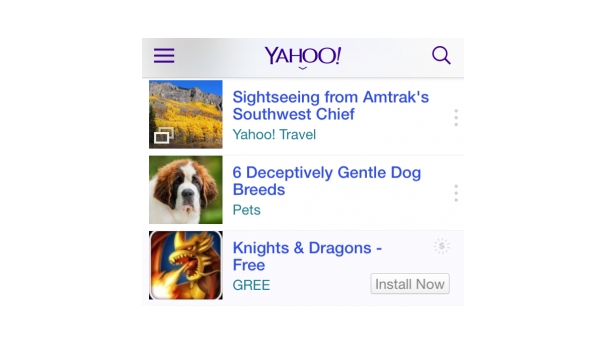 Small business owners and independent developers trying to market their own apps may have a new way to reach a massive online customer base. Yahoo is hoping to emulate Facebook’s success in the mobile market. The online portal is testing new ads for mobile apps. These ads will enable people to click and install apps directly to their mobile phone or tablet.

The smaller number of clicks involved, the more likely it is that someone will buy your app, Yahoo believes. Therefore the company’s plan to have direct app installation links inside ads should encourage customers to buy. And this could result in a big sales boost for developers. Just consider the amount of mobile traffic Yahoo receives.

Right now, only a small select group of advertisers are being allowed to take part in the testing phase. But if successful, the program could be opened to small independent developers including small businesses with apps to sell. The program could allow these app developers to more easily connect with a larger mobile market.

“We’re testing in-stream ad opportunities with an initial group of advertisers who have mobile apps and who want to connect directly with audiences across Yahoo mobile apps and sites. These tests will begin to appear across all of our properties where in-stream ads run on iOS and Android devices.”

Facebook has a head start though when it comes to generating mobile revenue. More than half of the company’s fourth-quarter ad revenue came from mobile. Their debut into the mobile market in 2012 involved allowing people to buy advertising space in news feeds. As the user scrolls through their news feed, the ads would appear in between their usual posts and status updates.

These ads would have a link to the developer’s app in the App Store or Google Play. On Facebook, the ad also features thumbnail photos of any of your Facebook Friends who were also using that app. Finally, there is also an app store on Facebook itself.

Yahoo, on the other hand, apparently wants to take the opposite approach with an “app discovery service.” The ads will appear in Yahoo’s content feeds.

“According to numerous sources, comes a plan to turn part of the [Yahoo] homepage into a kind of app platform in a project called “Touchdown.” Apparently many months in the making, Yahoo apps – as well as third-party ones – would be published on the highly trafficked site.”

Mark O'Neill is a staff writer for Small Business Trends, covering software and social media. He is a freelance journalist who has been writing for over 25 years, and has successfully made the leap from newspapers and radio onto the Internet. From 2007-2013, he was the Managing Editor of MakeUseOf.com.
4 Reactions
Subscribe
Follow @smallbiztrends
RSS LinkedIn Pinterest iTunes