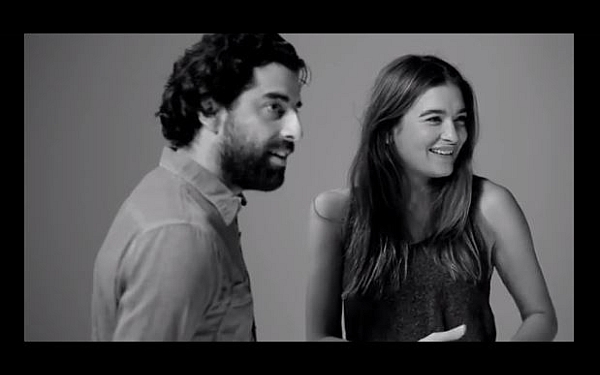 A video supposedly depicting couples’ first kisses has taken the Web by storm and it’s been a boon to a small clothing line.

In less than 10 days, the video has more than 64 million YouTube views.

The video is shot in black-and-white and features people purportedly meeting for the first time. They’re asked to kiss each other. The video was shot as a promotion for the launch of a fashion line called Wren, designed by Melissa Coker.

The video was shot for a promotion on Style.com. The promotion featured small-budget fashion lines who couldn’t afford to put on a runway show during New York’s Fashion Week. Coker’s company fit that bill so she decided to hire a director to shoot the video. After the director shared some links to the video, The New York Times reports, its popularity soon exploded.

Here’s the video, in case you somehow missed it:

The viral success of the video has stirred some controversy, according to a report from The Verge. Apparently the kissers featured in the video weren’t just random people off the street. Instead, they were a bunch of models, musicians and actors, all friends of Coker.

The video didn’t break the bank for Coker, either. The New York Times reports that it cost just $1,300 to shoot and produce. The actors worked for free. Most of the budget was spent renting a studio space and paying for a video editor.

One fashion expert, André Leon Talley, artistic director at Zappos Couture, told The Times that this single video may have provided more exposure to a small company than any runway show during Fashion Week could have.