Should a Small Business Use Indiegogo to Pay Business Debts? 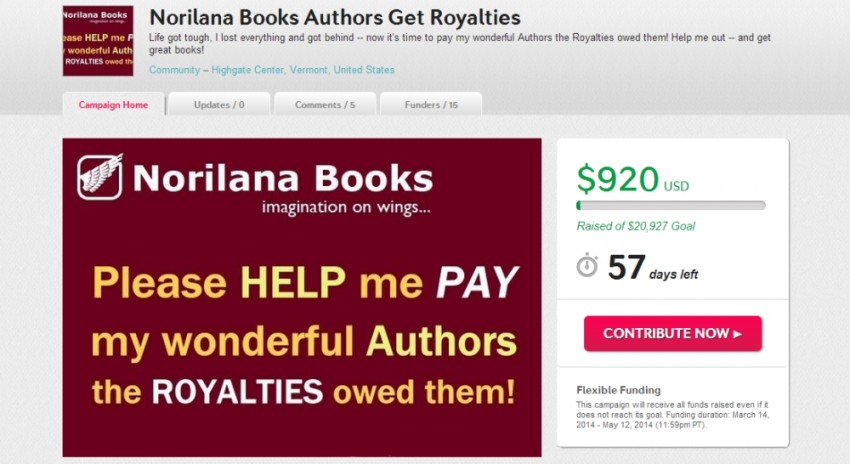 Heck no — at least, that’s the conclusion if you want to avoid the kind of stinging backlash one small publishing company got after going on Indiegogo to raise money recently.

Norilana Books, a small publisher, took to Indiegogo to raise money to pay authors the back royalties it owes them.  In some cases the authors have been waiting years for their royalty payments.

On March 14, 2014 the publisher set up a listing on the crowdfunding site seeking to raise $20,927. The Indiegogo listing reads in part:

“I screwed up.  I take full responsibility, and it is all my fault.

I am Vera Nazarian, two-time Nebula Award Nominee author, award-winning artist, publisher of Norilana Books. In 2006 I singlehandedly started a small independent press Norilana Books, with about 300 paper print POD (Print-on-Demand) titles in print, mostly classics of world literature (about 90% of the complete catalog), and a few of my favorite contemporary genre authors… * * *

Things were going well the first few years, and I was promptly and happily paying royalties to all my wonderful authors, and releasing handsome paper print editions of their works in hardcover and trade paperback. And then the economy crashed, while at the same time, a series of personal misfortunes struck.

But this fundraiser is not about me…  It’s about the wonderful Norilana Books authors who need to be paid their long overdue royalties. As months went by and I was struggling just to survive, I was no longer able to pay my authors the royalties owed them.”

The listing went live last Friday.  Within 24 hours the situation had spiraled into a confrontational discussion on a popular publishing industry blog.  It even spilled over on to KBoards.com, a popular forum frequented by authors.

Within three days after launching the Indiegogo campaign the publisher — under pressure — shut it down.

But that’s not before hundreds of comments were exchanged online. Many of the people who weighed in are self-employed authors — and many of their comments were critical of the publisher.

Some went as far as calling her a thief.

Defend Attacks, Or Rise Above Them?

The owner of the publishing company, Nazarian, jumped into the fray dozens of times to defend herself.  But as one observer noted, she might have been better off not spending so much energy trying.  The defensive comments tended to ratchet up the emotion. They drew more criticism.  A couple of times the KBoards forum moderators had to admonish participants not to get too personal.

Nazarian says that the repayment campaign was misunderstood.  She told us in an email interview:

“This Indiegogo was done entirely for my authors, and with the best of intentions.  I know it is easy to overlook, but this Indigogo was technically a book sale, and every $5 contributed was to be compensated with an ebook — one of my own books, which was costing only myself and none of my authors.

Without speaking of any of the dire personal things that happened in my life, and the economy in general, it must be pointed out that my small press (with the bulk of the catalog being public domain classics) was built solely on paper print sales. And with the advent and rise of ebooks the paper sales dried up. Since I firmly believe that authors should retain and control their own digital rights, I have always strongly encouraged all my authors to self-publish their own work in ebook. It is what I am doing now with my own books.

I am actively trying to make things right and have been working to the best of my ability, writing and publishing my own ebooks as a means of getting my income back and repaying all my authors their royalties in full. It is my number one priority.”

Nazarian is not without her supporters.  Some defended her, but they tended to be out-argued by vocal critics.  Some said they liked Nazarian personally but urged her to do “the honorable thing,” and stop selling other authors’ books so as not to make matters worse going forward.

In fact, 15 people contributed a total of $920 toward the Indiegogo campaign in the two days it was live. Clearly some supported the publisher enough to pledge money.

One of Norilana’s authors who hasn’t been paid, and who spoke only on condition of anonymity, still supports Nazarian.  “I am not happy about not getting paid, but I refuse to kick someone who’s down. She’s trying.”

Nazarian, for her part, says she wants to help her authors. ” These people are my friends, and I will do everything humanly possible to rectify the situation.”

Blurring The Line Between Business and Personal

The publisher in this case is very small — essentially a one-person business.  Vera Nazarian started out by publishing her own books.  Later she began publishing books for other authors.  Several years ago she began to run into personal difficulties, with medical problems, an aged parent, foreclosure and personal bankruptcy in the picture.  She admitted that she began to use the money for her living expenses instead of paying the royalties to the authors whose books she published.

So when the recent Indiegogo campaign came to light, the debate dredged up personal details about choices Nazarian had made in her life.  At one point commenters debated Nazarian’s monthly $212 cable TV/internet bill. Some questioned whether it was a reasonable expense, and pointed out how she could save money.  Some suggested that she should work harder and take on cover design work on the side to pay her debts.

Others even questioned whether she was exaggerating her illness … or using it as an excuse.  One person wrote in an anonymous comment:

“NO ONE SHOULD USE CANCER AS AN EXCUSE TO RIP AN AUTHOR OFF. I find this so offensive as a cancer survivor who had to fight through chemo weakness to extract myself from a respected publisher who was using my illness to corner me into a lousy deal that I rank you BENEATH Nigerian bank scammers.”

It’s hardly surprising to see personal issues brought up.  The publisher admits she used the royalty money for her personal expenses, instead of paying it to the company’s authors.  That opened the door for people to scrutinize her personal situation.

Not a pretty picture.

David Vandagriff, an attorney who runs The Passive Voice, the blog where much of the discussion took place, told us, “This story is, unfortunately, yet another illustration of the importance of really knowing who you’re doing business with. The best contract in the world won’t completely protect you if your partner won’t keep their commitments.”

And what about the owner of that small publishing company?  Nazarian says all contributions in the Indiegogo campaign will be refunded.  She added, “As of now, ALL of my authors’ rights have been reverted — many of them had been done so months and years ago — and all their books are being returned to them. From April 1, 2014 onward, Norilana Books will only continue to publish my own work and public domain classics. I am happy to help each one of the authors in any way I can in the transition, and to provide them with cover images and interior files free of charge, for their own use.”