Why You Should “Start With Why” 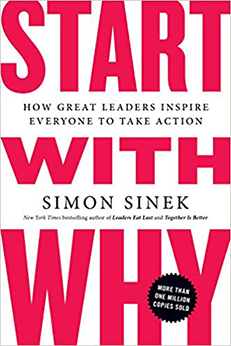 “It doesn’t matter what you do, it matters Why you do it.”

So writes Simon Sinek in his book, “Start With Why: How Great Leaders Inspire Everyone to Take Action.” Sinek, author, ethnographer and speaker, is best known for popularizing the concept of Why and for the talk he gave on the subject that became the second most watched talk of all time on TED.com.

In Start With Why, Sinek (@simonsinek) explains why some people and organizations are more innovative, more profitable and command greater loyalties from customers and employees alike.  Most importantly, however, is that they are able to repeat their success over and over.

The Wright Brothers Had the Right Stuff

Not many people know that the Wright brothers were not the only ones working on a flying machine. Samuel Pierpont Langley, an astronomer, physicists, inventor, mathematician and a pioneer in aviation, was given a $50,000 grant from the War Department to fund his project. He pulled together the best minds of the day and used the finest materials.

The Wright brothers, on the other hand, had no college education, no one to fund their project, and their team of friends and neighbors worked out of their bicycle shop.

But we all know how this story ends. Both teams were highly motivated, had excellent work ethics, and had a common goal. So what did the Wright brothers have that Langley did not?

Difference Between Motivation and Inspiration

Start with Why is a book about the inside-out approach. It’s about inspiration.

Sinek has discovered what he calls the Golden Circle: An unconventional perspective that explains why we are inspired by some people, leaders, messages and organizations over others.

“When most organizations or people think, act or communicate, they do so from the outside-in, from What to Why. And for good reason. They go from the clearest thing to the fuzziest thing. We say what we do, we sometimes say how we do it, but we rarely say why we do what we do.”

This is not true for inspiring companies and leaders, asserts Sinek. Every single one of them thinks, acts and communicates from the inside-out. By utilizing his Golden Circle, Sinek firmly believes that anyone can learn to inspire.

The Proof is in the Apple Pudding

Sinek frequently uses Apple as an example for his Golden Circle, and for good reason: Not only are their Whats (products) easy to identify, but their Why is so palpable that they have a “cult-like” following. His most popular Apple marketing example is as follows.

If Apple were like most companies, they would market their products from the outside-in. It would start with a statement of what they do or make, followed by how they think they are better, followed by some call to action:

“We make great computers. They’re beautifully designed, simple to use and user-friendly. Wanna buy one?”

However, Apple is not like most companies and they actually market their products from the inside out. They start with their why:

“Everything we do, we believe in challenging the status quo. We believe in thinking differently. The way we challenge the status quo is by making our products beautifully designed, simple to use and user-friendly. And we happen to make computers. Wanna buy one?”

The second message is completely different, it actually “feels” different to most people, including myself. I know which message resonates more with me, and I am not even an Apple guy. It’s a compelling example for sure.

The Residuum (The Rest of the Book…)

Utilizing a plethora of examples featuring companies like Microsoft, Southwest Airlines and Harley Davidson, Sinek devotes the remaining chapters of the book to further support and explain his Golden Circle approach.

One particularly useful chapter, How Tipping Points Tip, provides an excellent overview of Everett M. Roger’s Law of Diffusion of Innovation and how starting with Why can help you attract those early adopters, those influencers:

“You don’t just want any influencer, you want someone who believes what you believe. Only then will they talk about you without any prompts or incentives. If they truly believe in what you believe…they won’t need to be incentivized; they’ll do it because they want to.”

And these are the people you want to help sway the majority, because the majority will not try something until someone else has tried it. I’d like to consider myself an early adopter (of certain things) but if I’m even considering something new, whether a product, service or career, a personal recommendation typically seals the deal for me.

Start With Why offers an unconventional perspective on why people do what they do. Sinek tells a very compelling story filled with logic, examples, some science and just plain ole’ common (but not widely practiced) sense.

His Golden Circle approach can be put to use immediately and who knows, it just may change the way you do business. The book can be rather repetitive at times but as they say, Repetitio mater studiorum est – repetition is the mother of all learning.

So tell me – why do you do what you do? If you can’t answer this question, then Start With Why is for you.

Robert Schwenke is the Founder of Schwenke & Associates, a scientific and technical consultancy specializing in helping clients innovate faster with reduced risk. As a life-long learner, Robert devotes a high percentage of his resources in the pursuit of (and blogging on) self discovery, innovationalism, and entrapreneurship.
3 Reactions
Subscribe
Follow @smallbiztrends
RSS LinkedIn Pinterest iTunes