One Small Business Turns the Tables on a Union Campaign 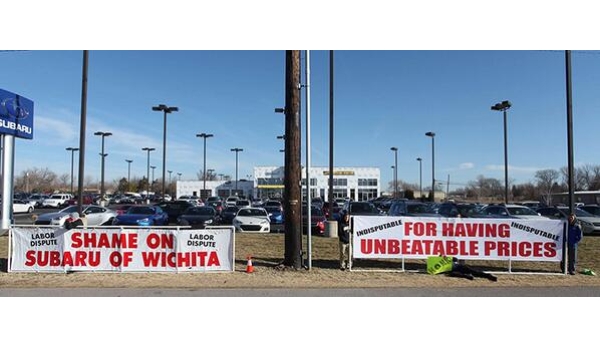 One small business in Kansas has turned the tables on a local union’s aggressive campaign against it.

A Wichita, Kansas, carpenter’s union recently took umbrage with the fact that a local Subaru dealer did not hire union help to build its new showroom. The union put up a sign in front of the dealership that read: “Shame on Subaru of Wichita.”

The union has apparently tried similar tactics with churches, businesses and non-profit organizations in the Wichita area.

Rather than allow the union to have the last word, the Subaru dealer turned the potential public relations nightmare on its head. The dealer displayed its own sign right next to the union’s sign. It read: “For Having Unbeatable Prices.”

In a post on Subaru of Wichita’s official blog RideHomeHappy, the company stated it’s own case explaining:

“We invite you to consider the facts and decide for yourself if Subaru of Wichita is “Desecrating the American Way of Life,” as the Carpenters Local 201 claims:

–We financed through Wichita-based Equity Bank

Key Construction bid out the drywall portion of this project to several companies, both union and non-union. The project was awarded to the lowest qualified bid and completed well before protesters arrived.”

This is a good lesson for any small business on how to make the most out of a seemingly bad situation. It’s hard to imagine anything worse or more intimidating than a crowd of protesters outside your business. But Wichita Subaru found a way to take lemons and make lemonade.

The company took a potentially volatile situation and turned it into a great marketing opportunity, and did so with humor and flair.

In fact, so effective was the overall impact that at least one commenter on a Washington Post column mentioning the incident doubted there was even a real labor dispute at all. Instead, the suspicion was raised that the whole protest was nothing but a “gimmick” created by the dealership to increase sales.