The First Consumer 3D Printer Is Now In Crowdfunding 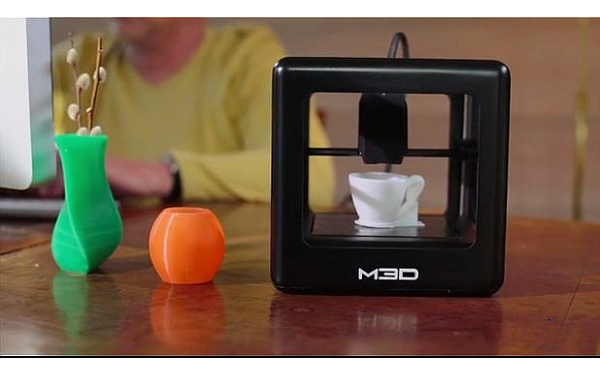 It’s called the Micro and developers of the device call it the first consumer 3D printer. A crowdfunding campaign is under way on Kickstarter, and has already raised well over the amount needed to put the device into production.

Maryland-based developers M3D have said that the 7.3 inch cube, weighing about half a pound, can be used for a variety of purposes, including creating items for a business. As an example, TechCrunch made a mold that was then used to make specially branded chocolate bars. You could also make other things such as promotional trinkets to hand out, and small items to sell.

To quote the Kickstarter page :

“Bring your ideas to life, turn them into businesses, educate, learn, personalize products, make toys, make jewelry, start a curriculum, run a modern workshop, and unleash your creativity. The power of creation is yours!”

This video from the Kickstarter campaign gives an overview of the device:

What makes this 3D printer stand out is the price. Normally the prices for 3D printers are prohibitively high, and therefore out of the range of ordinary consumers and some small businesses. But the Micro will cost a very affordable $299 and should be ready between August 2014 and March 2015. It is also supposed to be ideal for beginners, who are just starting out in 3D printing.

Because of their high price and complexity, 3D printing seemed firmly in the grip of specialists before this. In fact, last year the UPS Stores announced availability of 3D printers at some locations to make them available for small businesses.  But the Micro seems to be taking 3D printing to the general public, both with cost and apparent  simplicity of operation.

Of course, as TechCrunch points out, at $299, some corners were probably cut. So don’t expect top quality results. Remember the old saying “you get what you pay for.”

The printer comes with specially designed companion software to enable you to download and select what you would like to make. 3D modeling designs are only a Google search away, and the software helps you to download the ones you are interested in. The software is touchscreen-capable and has a minimalist interface.

If you want one of the first ones off the production line, you have until May 7 to become a backer on Kickstarter.