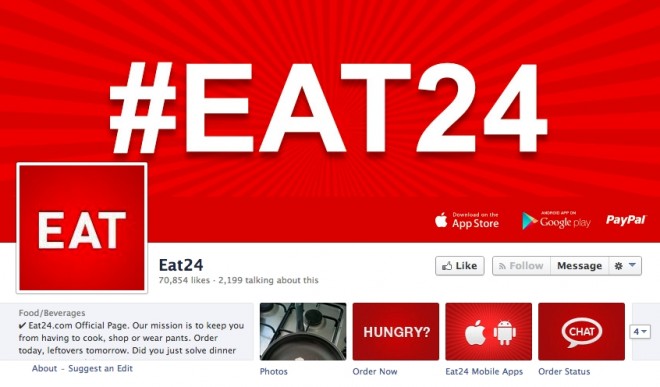 As the famous saying goes, “There’s no such thing as a free lunch.” And food delivery startup Eat24 has found this out the hard way. Eat24 publicly announced it was leaving Facebook recently. It’s mainly over changes to Facebook’s Newsfeed algorithm which controls the number of non-paid posts brands can share with their followers. But the social networking site’s response was basically, “Get used to it. This is how it’s going to be from now on.”

“When we first met, you made us feel special. We’d tell you a super funny joke about Sriracha and you’d tell all our friends and then everyone would laugh together. But now? Now you want us to give you money if we want to talk to our friends. Now when we show you a photo of a taco wrapped with bacon, you’re all like “PROMOTE THIS POST! GET MORE FRIENDS!” instead of just liking us for who we are.”

After years of free marketing, businesses like Eat24 are finding Facebook is starting to restrict the number of followers who can see a brand’s updates in their Newsfeeds. More and more, the only way to guarantee fans will see your Newsfeed these days is for them to visit your Facebook page. You can also pay extra for Facebook’s sponsored posts. Obviously Facebook prefers door number two.

This pattern of behavior is more than mere perception on the part of disgruntled Facebook marketers. A recent study by Ogilvy & Mather found that companies’ Facebook posts went from reaching 12 percent of their followers in October to just 6 percent in February. Valleywag reports Facebook is planning to make sure no more than 1 to 2 percent of a brand’s posts reach followers eventually.

“Hey Eat24, this is Brandon over at Facebook. I was bummed to read your letter. The world is so much more complicated than when we first met – it has changed. And we used to love your jokes about tacquitos and 420 but now they don’t seem so funny. There is some serious stuff happening in the world and one of my best friends just had a baby and another one just took the best photo of his homemade cupcakes and what we have come to realize is people care about those things more…So we are sorry that we have to part this way because we think we could still be friends – really we do. But we totally respect you if you need some space.”

It’s certainly easy to see why businesses are angry about Facebook persuading them to sign up for promotional pages and the lure of all that free marketing. Then years later, when the hard marketing work has been done, Facebook starts demanding money.

Valleywag points out that Facebook is a business and needs to turn a profit. But certainly big brands advertising regularly on Facebook must be taking care of some of that.

The real casualties are small businesses, with zero advertising budget, and who were creating loads of great content for Facebook absolutely free. Those businesses may need to find other ways to market their products and services in the future.