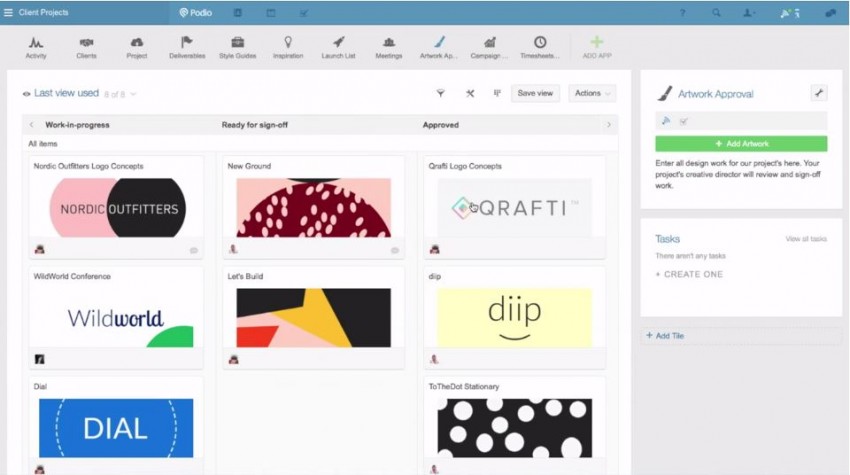 Podio is a tool that allows teams create their own collaboration apps without knowing code or bringing in an IT department to help. So, for example, if you need an app to track your team as they complete a major marketing or other project, Podio can do that, the tool’s creators say.

So, for example, he says that instead of setting up the app and adding content in two separate steps, the new Podio now allows you to do it in one.

Podio Founder Kasper Hulthin says the tool allows teams to avoid hundreds of unnecessary meetings and emails. It does this just by creating apps that let teams track the progress of projects through various stages or departments.

In this video, the Podio team describes the new version of Podio:

A simple tutorial shows how to create an app to manage your project. To create a Podio app, you first choose the people you wish to invite to collaborate.

Then enter detailed information about the project you wish to manage. This should include a complete description of the project, the timing for completion and the key people involved. Then create a list of deliverables (basically pieces of the project that need to be completed). You can then track members of your team as they add their parts to the project.

By clicking on each deliverable, you can see who on your team is responsible for each, check the progress and get an estimate of when it will be completed. To complete the project, team members can attach Google Docs, files from other major file sharing services or even files from their computers.

You can also schedule and hold meetings with your team about the progress of the project in HD video. And you can follow progress in an activity stream which shows work on the project as it occurs.

In the company’s official release, customers like Ryan Brock, CEO of Metonymy Media, a creative copywriting firm, say Podio is effective for creative teams that don’t want to spend all their time managing projects. He explains:

“As writers, we want to spend our time writing – not on data entry and updating spreadsheets. Podio allows us to work better by saving time on the backend tasks so we can really focus on the creative process. As a result, we’re able to maintain a high level of contact with our clients – they love our creative processes and our approach to copywriting.”

Currently, Podio has a free version of its service for teams of five members or less and charges $9 per employee per month for its “Teams” plan. Rates on a “Business Plan” are also available by contacting the company.