Satanic Latte Art? How Should a Business Respond? 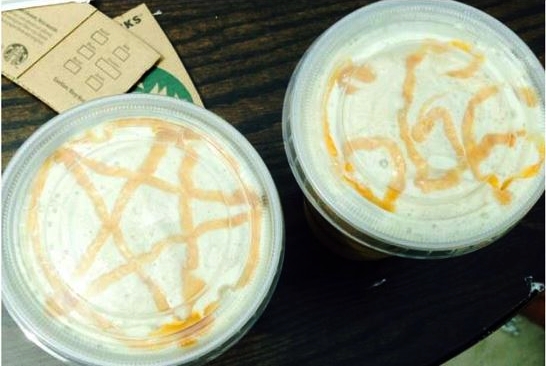 When a Louisiana teacher visited her local Starbucks, she didn’t expect that her coffee drinks would deliver a satanic message. But when she looked down at the two drinks, she allegedly saw just that. One of them depicted a star that appeared to be Lucifer’s pentagram and the other included a 666 made with caramel drizzle.

Megan K. Pinion posted a photo to the coffee chain’s Facebook page with the following comments:

“I just purchased two coffees at your Mall of Louisiana location. This is how my coffee was served to me. I unfortunately can’t give you the young man’s name who served it because I was so appalled that I could not bring myself to look at him. The star is almost okay because it is in your Starbucks logo, the 666, however, was quite offensive. I am in no way judging his beliefs or dis-meriting his beautiful artwork, I am however judging [the barista’s] lack of professionalism and respect for others.”

In addition to her post on Facebook, Pinion also filed a formal complaint with Starbucks. The company has since apologized to Pinion, a public school teacher who is of Catholic faith. But it hasn’t commented on whether or not the employee responsible for the artwork would be disciplined. 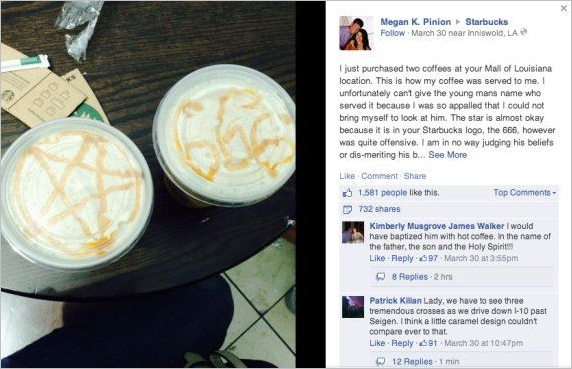 “We’re taking the complaint seriously and have sincerely apologized for her experience. . .This obviously is not the type of experience we want to provide any of our customers, and is not representative of the customer service our partners provide to millions of customers every day.”

What should the appropriate response of the business be in this situation? Starbucks apologized. Should they have done more?

A sincere apology is nice, but isn’t always good enough when a customer receives poor service or is offended by an employee.  In this case, Pinion likely wasn’t the only one offended. Countless other Starbucks customers saw the post on Facebook and likely came to their own conclusions about the incident and how the company should have reacted.

Firing or otherwise disciplining the employee responsible for the artwork would be one option. But Starbucks said it is their policy to not publicly discuss such actions, and Pinion wasn’t able to provide the company with the employee’s name.

Another option would be to compensate Pinion in some way for the unsatisfactory service she received. The company has issued gift cards in the past to apologize for service issues at franchise locations.