Could Your Next Pizza be Delivered by a Drone? 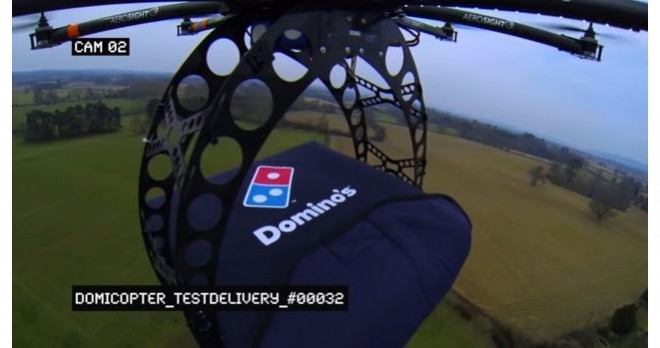 Perhaps you caught the story recently on 60 minutes on Drones Over America. Or more likely you’ve heard about the interview with Jeff Bezos of Amazon on their plans to begin using drones to deliver packages to your door.

Drones are becoming a very hot, and controversial, topic. As technology advances, this once extremely expensive tool that was used primarily by the military is now available to the everyday Joe. But with strong concerns revolving around privacy and the U.S. government’s insistence on regulating this new technology, we are left to wonder what role, if any, drones will have in small business, and if they are simply a futuristic dream or a soon to be reality.

Let’s back up a bit and give those who haven’t heard anything about drones a bit of information. An unmanned aerial vehicle (UAV), commonly known as a drone, is an aircraft without a human pilot aboard. Flight of these objects is typically controlled autonomously by onboard computers or by remote control of a user on the ground. Drones come in a variety of sizes and shapes, and while they were typically used in military and special operation applications, they are growing in use in a number of civil applications including firefighting, policing and search and rescue missions. Drone use is preferred in what industry experts refer to as ‘DDD’ situations: Dull, dirty and dangerous.

Domestic drones, although relatively new, are a multi-billion dollar industry and one that is growing rapidly and creating thousands of jobs. We are seeing these devices being used in a number of creative ways by commercial businesses. While some of the examples we’ll share are purely promotional, the fact remains that they may actually be possible as the industry expands and grows.

This is probably why Facebook is looking to purchase drone company Titan Aerospace for $60 million dollars to help with an initiative called Internet.org. In keeping with the initiatives goal to bring Internet connectivity to the two-thirds of the world’s population that currently lacks access, solar powered drones would be stationed, like satellites, above these areas to provide an Internet signal. There is an absolute value to these devices and their technology, which will only grow as the technology does and our imaginations allow.

Here are some of the unique uses of drones in small business we discovered:

Australian textbook company Zookal teamed up with Flirtey, the worlds first autonomous aerial delivery company, to deliver textbooks to Australian college students. While this exercise was a bit more about promotion than practicality, due to the cost of running the drone and the capacity of existing battery life, it did display that it is not a far-fetched idea that is very possible as the technology increases in efficiency.

In June of 2013, a Domino’s pizza franchise in the U.K. revealed a video of their ‘DomiCopter’ – a UAV delivering piping hot pizza to your door (pictured above). This project, the brainchild of Domino’s independent master franchise company in the U.K. and one not being considered in the U.S., demonstrated that food delivery such as this, although a bit promotional, would be very doable in the near future.

Taking Autism to the Sky is a Kickstarter campaign created by Paul Braun of Madison, WI. This project lets kids with autism get a new perspective of the world – from the air – by building their very own hexarotor, flying it and making a film of their journey. As listed on their Kickstarter website:

“One major benefit is that this project will showcase a positive, peaceful, enlightening application of “drone” technology that is often viewed in a negative light given the military’s use of it. The term drone conjures up negative images of surveillance, bombing and description. This project, however, looks to humanize and personalize the technology. To shed light on and feed the human condition.”

Because many UAV’s can be programmed to follow GPS coordinates, drones can serve as the perfect tour guide, directing you to specific points in a specific area. MIT is using drone technology to give students a tour of their complex campus.

The first is the concern of privacy. While there is no doubt that we live in a surveillance society and there are cameras everywhere watching our every move, the introduction of an unknown entity, such as a drone, opens a whole new bag of issues that government regulators need to review.

The second is safety and the obvious issues of flying these devices into birds, planes, personal property and people. While other countries, such as Australia and the U.K, have more open acceptance to the use of UAV’s with limited regulation, it will be some time before we see regulations allowing the commercial use of drones. As the industry grows, technology expands and more commercial uses of these devices are discovered that will allow for the savings of significant amounts of money for businesses, regulation may well be pushed along to allow for their use.

Until that time, we’ll need to keep dreaming about the day our Amazon package drops out of the sky and onto our front doorstep just hours after ordering. And while you may think that the daily use of drones in business is a completely far-fetched Sci-Fi idea that only our great-grandchildren will ever experience, I remind you of another technology that we felt the same way about only 30 years ago: The cell phone.

Here’s to dreaming, technology and forging our way into the future!

SmallBizTechnology.com is part of the Small Business Trends Publisher Channel, and is all about helping “regular” small business owners – those who are not technically savvy – know what technology they need to boost productivity, save time, save money, increase revenue and boost customer service in their business.
4 Reactions
Subscribe
Follow @smallbiztrends
RSS LinkedIn Pinterest iTunes