This African Entrepreneur Creates 3-D Printers Out of E-Waste 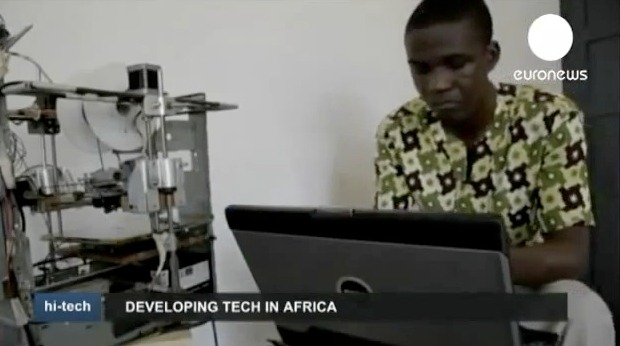 West African entrepreneur and inventor Kodjo Afate Gnikou didn’t have access to a lot of tools and resources for building new technology. But he wouldn’t let that stop him from creating cutting edge devices. Instead, he frequented local scrap yards and put together what is believed to be the first 3-D printer made from e-waste.

In doing so the entrepreneur has not only found a way to create a much more expensive piece of technology at a lower price. He’s also found a way to  reclaim technology waste in a way that may keep more of the material out of garbage dumps and landfills. This could be the start of a green tech business.

The 33-year-old said in a recent interview with Euronews:

To create his printer, Gnikou scoured a nearby scrap yard to pick up rails and belts from old scanners, as well as bits from old hard drives and desktop computers. He had to buy a few supplies new. But overall, the 3-D printer only cost him $100 to make.

Gnikou has spent several months creating his 3-D printer prototype. The device is already able to create containers and other helpful household items. But Gnikou says he isn’t done yet. The entrepreneur also believes a larger version of the printer could eventually be sent to Mars as an inexpensive way of creating homes for humans there.

Others see the potential, too. Gnikou was recognized by the NASA International  Space Apps challenge last year.

It might sound far-fetched, but building a 3-D printer from materials found in a West African scrap yard probably didn’t seem that plausible before Gnikou made it happen.

His ambition, creativity, and attention to detail allowed him to create an incredibly useful device while finding new uses for old and discarded materials.

Too often, people let limitations like lack of funding or supplies get in the way. If more people, particularly entrepreneurs, used such roadblocks as a chance to get creative, we’d likely have much more innovation in the world.

3-D printers can cost thousands of dollars to buy. Even the cheapest models retail for around $300. So if a company needed such a device and didn’t have the funds, it would be easy to simply give up. But Gnikou created a device for a considerably lower cost by thinking outside the box. And that’s a quality all entrepreneurs should value.