Dropcam, The Easiest Security Camera for a Small Business 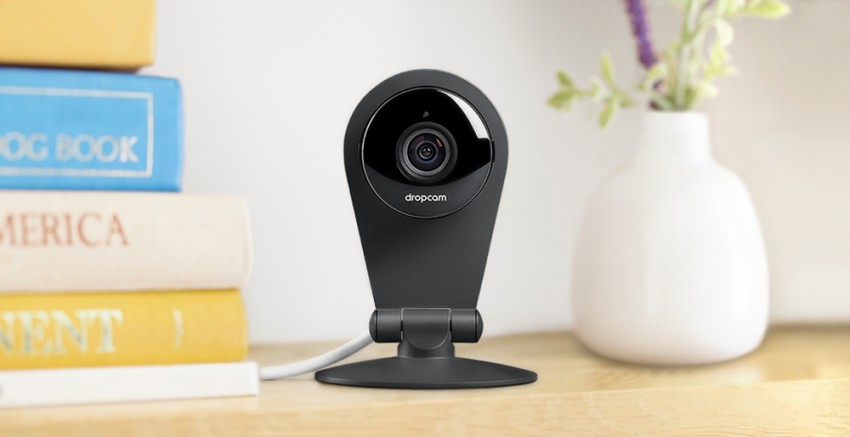 Dropcam is just what the name sounds like, if you think about it a moment.  It’s a video surveillance camera that you can “drop” anywhere to get started.

When it comes to setting up, operating and preserving footage from a security camera, Dropcam has got to be one of the easiest systems you will ever come across.    It is a do-it-yourselfer’s dream.  The price is right, too.  Dropcam is less expensive than traditional CCTV surveillance systems.

In our tests it performed exactly as it was designed to, over a period of several weeks.

But Dropcam has some limitations that mean it won’t be useful in every business situation.  We’ll get to those in a few moments.

Still, for an entry level video security system, Dropcam is definitely easy and convenient. And it may be all that many small businesses need. Let’s take a deeper look at the pros and cons in this Dropcam review. 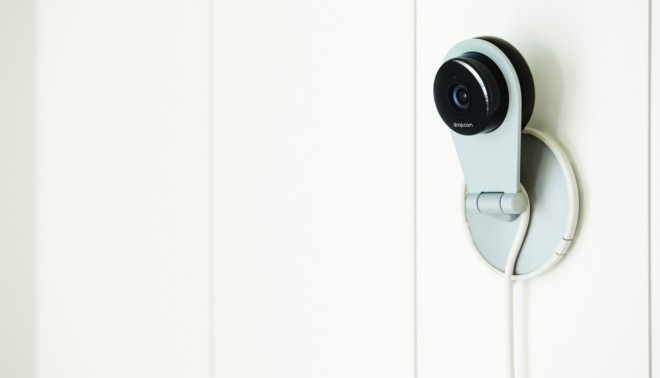 Ease of setup:  Last year I acquired a Dropcam HD camera, but only recently set it up.  I am sorry I waited so long.  With most tech gadgets I wait until I have a big block of time set aside because I find it almost always takes much longer than anticipated to get them up and running.  That was not the case with Dropcam.

Dropcam advertises “60-second setup.”  While it wasn’t quite that fast for me, it came close. It took me less than 5 minutes to unbox my Dropcam and get to the point of seeing live video surveillance of my office on my computer.  I didn’t have to troubleshoot or keep referring back to a manual – it just worked.  I can’t remember the last time any new tech gadget was quite that fast and easy.

And it’s all a seamless setup, so there’s no heavy lifting on the technical side needed.   It’s ideal for nontechnical do-it-yourselfers.

I used the included USB cord to connect the camera to my computer for setup. It automatically detected my wireless network. Once the setup was complete, I disconnected the camera from the computer, and placed the camera where I wanted it.  The more-expensive Pro camera also can be set up wirelessly using an iPhone.

Remote access:  Dropcam works via your WiFi network in your home or business.  So the camera livestreams online via your WiFi network to your Dropcam account “in the cloud.”  That means you can watch your security video live online — from thousands of miles away if you need to.  Or you can simply watch the retail floor from the back office in your shop.

You can check your Dropcam camera feed online using a Web browser from your computer, or via the  iPhone and iPad, as well as Android phones and tablets.  You can change various settings remotely from your Dropcam account online, as well.

Automatic storage:  Dropcam offers automatic storage of your surveillance video footage. It’s very easy. You don’t have to do anything to make it happen, except sign up for cloud storage.

You also can make 3-hour clips and save those clips so that they are not overwritten.  However, you must manually create the clips from your archived video. So that part takes a bit of extra work.  More importantly, the video footage could already be overwritten by the time you realize you should have saved a clip.

Portability:  Dropcam comes with its own little stand.  Just set the camera on a table or shelf.  As an option you can attach it to the wall.

You can place the camera just about anywhere as long as it stays within your WiFi range and the WiFi reception is not blocked.  The camera doesn’t need to be physically connected to a computer.

Video quality:  Dropcam records and streams in HD or non-HD (you choose).  The video quality during the day is pretty good. The lower the light, the lower the quality. The Pro camera has higher quality.

Night vision:  The camera adjusts so that it even films at night.  The night vision was not great, but you could see — except in one situation.  When I put the camera inside a window facing outside, the reflection made the night vision mode useless.

Security and privacy:  The surveillance footage is encrypted for security before it is sent to the cloud.  You can choose to make it public or private by adjusting a setting of your Dropcam account.

Two-way sound:  You have the ability to listen and talk through the camera.  That’s a useful feature that, while we didn’t use it often, came in handy when we did use it.  Audio quality was OK although not great on the regular version of the camera. Any background noise like music made it more difficult to hear and be heard.

Email alerts:  Dropcam has the ability to send you email alerts such as when motion or sound is detected.  That’s fine when the camera is trained on premises where there normally isn’t much movement.  When I tried monitoring the front entrance of my premises, though, I didn’t make it half a day before the email alerts became tiresome.  I got an email alert every time a car passed on the street or a dog barked.

Dropcam says that its Pro camera has a feature called “activity recognition” that will “learn” certain actions and you can tell it to ignore them.  We did not try that particular feature.

Price:  Dropcam is affordable.  Each Dropcam camera currently costs $149 for the HD version, and $199 for the Pro version.  We tried out the HD camera and were happy with the quality.

Don’t forget to factor in the cost of a subscription to save your video footage.  If there’s an accident or a crime committed on your premises, you’re going to need the recorded video.

You’ll pay between $120 and $360 a year to archive some of your security footage from one camera.  You are charged for each camera you wish to store video from.  While there is a discount for multiple cameras, the expense (not to mention bandwidth) can rack up fast once you get beyond 2 or 3 cameras.

Motion sensors:  Dropcam recently released Tabs, which are small movement sensors that work together with the Pro camera.  Tabs tell you if a window or door has been opened, for instance, or whether valuables like  laptops have been moved.  We did not try out Tabs. Tabs are optional, and go for $29 each. 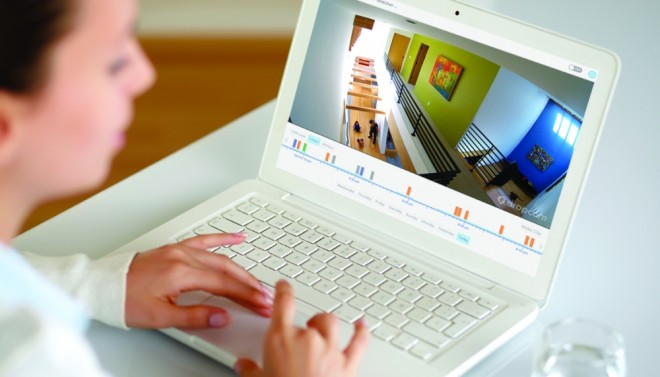 No local storage:  Dropcam has no way of archiving security footage locally to an SD card or to your own local network, as some other WiFi enabled security cameras do.  That means your two choices are to opt for the online storage, or have no saved video.

Provided that you don’t mind paying for online storage, then Dropcam is almost foolproof in the sense that you don’t have to worry about changing tapes or disks to save footage, or connecting to a local network.  We all know what happens when you have to manually back up anything such as surveillance video.  Yep, when you need that video the most, it won’t be there due to human error.  Dropcam’s system avoids that particular issue.

If your WiFi or Internet connection goes out, you won’t have any recorded video with Dropcam. That’s something else to keep in mind.

Not for outdoors:  The Dropcam is not weatherproof.  It’s strictly for indoors surveillance.

Originally I had planned to use Dropcam to keep an eye on the front door. But I realized I would have to use the camera inside.

Some fans of Dropcam have purchased weather housings or built their own plexiglass boxes to use Dropcam outdoors.  If you are handy and like to tinker, that might be something to consider.   I wasn’t interested in putting that much effort into trying to weatherproof my Dropcam, so for me it’s strictly indoors.

Dropcam does not recommend using its cameras outdoors, even with DIY modifications.  Dropcam has said for two years that it is actively working on the feature request for weatherproof cameras.

You might not think that’s a drawback, because of course any camera will need a power source.

But be sure to plan for the power cord in advance.  I placed my camera on a transom window ledge above the door. That meant looking at an unsightly cord running up the wall.  The cord wasn’t quite long enough to run it flush with the baseboard and then alongside the door frame, so it ended up stretched diagonally across the wall from the outlet.  Eek!

Then I decided to add an extension cord.  But that meant I had a pile of excess extension cord puddled on the floor — unsightly and all too easy to trip over.  If the outlet happens to be behind furniture, then no big deal — you can hide it. In my case, the outlet was on an open wall and I didn’t have that luxury.

You could always punch a hole in the wall and snake the cord through the wall.  However, that might be beyond the capability of some do-it-yourselfers, and require an electrician or handyman.

My point about the power cord is that hiding it may take some extra work.  As long as you don’t have to worry about hiding the cord, then it’s a non-issue. 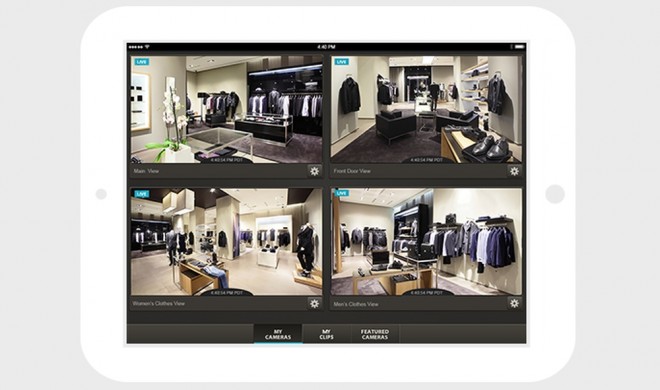 There are other WiFi enabled cameras on the market. You can find WiFi cameras for under $50 at places like Amazon.com.  Just remember, some cheaper brands have significant drawbacks, including complicated setup, poor video quality, and reliability issues.  (We tried two other brands, and in one case never did manage to connect it to WiFi despite hours of troubleshooting.)

You can also find more expensive systems, from mid-range in cost like the Linksys security cameras, to many thousands of dollars and needing a professional to set them up. And in fact, you may need a professional system if you need to integrate your cameras with other systems or devices, or need advanced bells and whistles, or need local video archiving.

But when you consider the whole package, Dropcam is a good balance of convenience and price for a small business — especially if you are a do-it-yourselfer and you only need a few cameras.

Aside from security, Dropcam may also have uses such as showing what’s happening in the kitchen of a restaurant to dining patrons, so they can be part of the experience. Dropcam is also great for home usage, of course.

If you are looking for a drop-dead simple, video security system for your interior business premises at an affordable price, take a look at Dropcam.