Spotlight on Fishtown Pharmacy: Promoting Connection to the Community 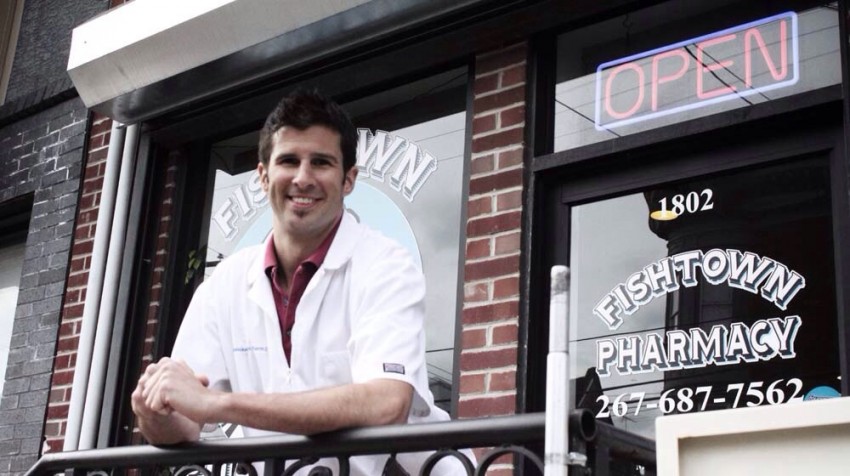 This week in our spotlight we introduce you to Fishtown Pharmacy.

WHAT THE BUSINESS IS KNOWN FOR: Fast and unparalleled service.

Owner and pharmacist Kris Hunsicker (pictured above) believes the pharmacy’s success is rooted in truly knowing people as well as you know their medicines. Customized care begins by acknowledging the pharmacy has no customers, only patients, Hunsicker says.

WHAT INSPIRED THE BUSINESS STARTUP? The desire to create a different vibe.

From the beginning Hunsicker felt the stigma behind going to the pharmacy was wrong. Like going to the doctor, it was a thing to do when you got sick. But instead, he felt pharmacies should have a pleasant atmosphere and that pharmacists should promote a sense of welcoming and wellness. Believing much of the industry had lost this focus, Hunsicker said he felt he needed to open Fishtown Pharmacy to “refocus” the industry on this aspect of its service.

BIGGEST RISK TAKEN IN THE BUSINESS: Opening the pharmacy in the first place!

Hunsicker says opening a neighborhood pharmacy in the face of retail giants was the biggest risk he ever took. But he believed patients would still value personalized service above all else. He ignored what he describes as third party insurance carriers trying to push patients into mail order, or mandate them to use a specific chain pharmacy. The move required some serious inner faith and immense positive reinforcement from his wife and family.

BIGGEST WIN: Support of his staff and patient base.

Having worked as a pharmacist for more than 15 years prior to opening a small neighborhood pharmacy of his own, Hunsicker says his biggest win was that his two longtime technicians followed him into the new venture. Another “win”  is a patient base from his former place of employment some of whom drive 10 to 15 minutes just to patronize his pharmacy. He says another “win” has been the neighborhood of Fishtown’s strong support of small independent businesses like his.

ONE THING THE BUSINESS WOULD DO DIFFERENTLY: Should have done this 10 years ago.

If given a do-over the one thing Hunsicker believes he would change is to start on the entrepreneurial path sooner. He admits fear of the unknown kept him from striking out on his own sooner. But today he says he believes he gained something by waiting. Mainly, he believes that he learned from his experience in other working environments both what he wanted for himself and for his employees. He adds that years of being told he was expendable by his former employer, and that the doors of the pharmacy would open and close with or without him, had taught him something. Today, he says his employees know how integral they are to his business operations. In fact, he says he believes if employees are indeed unimportant – it probably means he’s hired the wrong ones.

FUN FACT: This pharmacy has a “fun committee.”

Taking advice from a blog, Hunsicker once established a “fun committee” at his pharmacy whose sole function it was to maintain good morale. By contrast, he says at his last job, he often had to give himself a pep talk before walking in. It is his stated goal to make sure none of his employees ever feel the same way about coming to work at his pharmacy.

IF THIS BUSINESS WAS A BOOK, IT WOULD BE: “Conscious Capitalism” by Whole Foods Founder John Mackey and Raj Sisodia.

Hunsicker calls the book “wildly inspiring” because “it details how businesses can enrich their communities, create value for their customers, benefit their employees, and determine your business’s own higher purpose,” he explains.