How This Man Made Millions Selling Five Dollar Potato Peelers 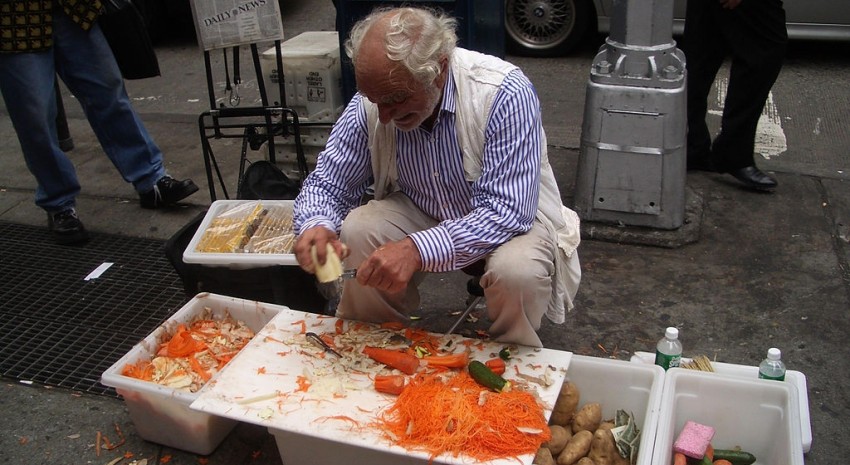 Entrepreneur Joe Ades spent his days selling potato peelers on a sidewalk in New York City. But he spent his nights in a posh Park Avenue apartment. It might seem like a strange career for a millionaire, but Ades found great success with his potato peeling business.

He said in a 2008 appearance on The Today Show:

He sold the potato peelers for $5 each in well-populated areas like the Union Square Greenmarket. He attracted customers with his charm and then demonstrated the product right in front of them on the sidewalk. Potato peelers aren’t necessarily the most exciting products to demonstrate and sell, but Ades was confident in his abilities as a salesman.

He originally learned how to sell things as a teenager in Manchester, England. He sold everything from children’s books to Christmas trees over the years. He eventually chose to sell potato peelers in New York City because they were small and lightweight.

At one point, he even taught his daughter the tools of the trade so she could sell books to put herself through college. But once he realized the success of his potato peeling business, he said he wanted to put his granddaughters through college so they wouldn’t have to do the same.

So even in his mid-70’s, Ades got up before the sunrise and set out to sell his potato peelers six days a week. And it was through that hard work that he made an incredibly simple business plan into a success.

Some business owners might have chosen to expand to new products. They might have chosen a new location. Or they might have at least obtained an official permit (something Ades never did), so they could sell in the center of the Union Square Greenmarket instead of on its outskirts. But Ades kept it simple. He found something that worked, stuck with his product, trusted his sales ability, and worked hard every day.

Ades passed away in 2009, but the people of New York still remember how he could make something as outwardly mundane as a potato peeler seem exciting. And entrepreneurs in all industries can learn something from the way he managed his business.