10 new devices from Acer will appeal to entrepreneurs and others who place a high value on mobility and favor cloud services over pre-loaded software. The new devices were introduced recently at an international press event in New York City. Small Business Trends was on hand for the unveiling.

The event included a sneak peak at the company’s newest Chromebook. Though it currently has no name, the new device is part of Acer’s C720 line and works on the Chrome operating system.

Another seven devices including laptops and all-in-one tablets are Windows 8.1 machines, and two mini tablets run on Android KitKat.

Company officials did not say whether small business owners might be among the targeted customers  for this new crop of computers. However, Michael Birkin, Acer’s Chief Marketing Officer said they are meant to appeal to BYOC (“bring your own cloud”) users who will soon make up the majority of the workforce.

Most are fairly affordable in the $100 to $400 range. Though the all-in-one devices are considerably more expensive starting between $600 and $1000.

Aspire Switch 10 is actually a notebook and a tablet because the screen detaches, hence the name. For those who’ve used Lenovo’s Yoga hybrids, the Acer Switch 10 will be familiar in concept. For example, if you raised the hinge 10 inches off the table and tilted it, the laptop would have an inverted “V” appearance. If you’d rather not move the entire device, you can present what’s on your screen to someone sitting across from you by detaching and reattaching only the display without rotating the machine itself. 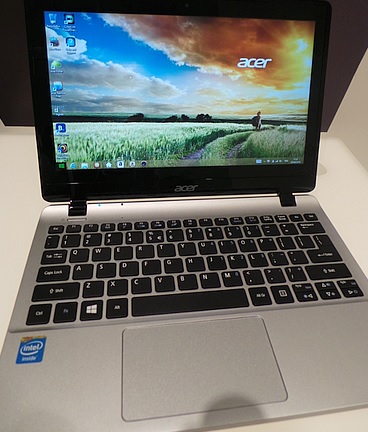 Aspire E 11 doesn’t have a touchscreen, but the display is HD, at 1366 x 768 pixels. It supports up to 1 TB of storage and 8 GB of RAM. Designed without a cooling fan, it weighs 2.84 pounds, the lightest laptop shown at the preview.

Aspire E 14 comes with a touchscreen option, or a standard screen for the more frugal. The hard drive in both stores up to 1 TB of data. The touchscreen model responds to 10 points of input and has the same HD display as its non-touch sister at 1366 x 768.

Iconia Tab 7 uses a MediaTek processor, and has an IPS display with 3G connectivity, allowing voice calls on a cellular plan. Whether or not Acer will sell this model in America is still to be determined.

Aspire U5-620 is a 23-inch all-in-one touchscreen computer powered by an Intel Haswell processor. Acer wants to market it to people who want high-quality video chats, offering a full HD 2mp webcam, dual array microphone and other traits meant to appeal to this market. Skype certification for this model is expected in August 2014. The U5-620 adjusts to a flat position with a push of a finger.

Aspire Z3-615 comes in both touchscreen and non-touch varieties.  Also with a 23-inch 1080p screen, the Z3 has elements like the Acer CineBoost Color Engine and Dolby Digital Plus Home Theater.  It will not be available until late June.