27 Percent of Mobile Sites Are Misconfigured Leading to Lower Traffic 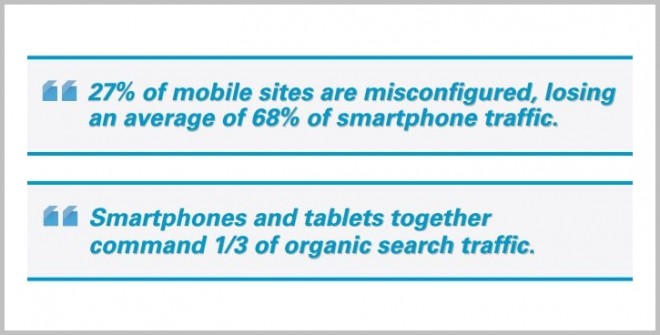 Want to know why the mobile version of your site isn’t reaping the benefit of all that mobile traffic you’ve been hearing about? Well, it could be because poor configuration of your mobile site is causing it to rank poorly with search engines.

That’s right. A new study says up to 27 percent of mobile sites are not configured properly.

And that could be costing you a huge amount of traffic, not to mention loss of revenue, because potential customers never even find the mobile version of your site.

“While the ranking outcome of a correctly implemented mobile configuration is virtually the same regardless of the type (e.g., responsive, dynamic, separate URLs), an incorrectly implemented site resulted in a drop in smartphone rank by almost two positions (1.82 on average).

This drop in the search rankings may not seem like much, but click-through rates are highly sensitive to rank. Thus, this drop in rank leads to a 68 percent drop in traffic.”

But more alarming than the loss of traffic to your mobile site is the fact that mobile makes up an increasing amount of overall Web traffic.

For example, Android and iPhone devices now account for an estimated 23 percent of organic traffic. And that share is expected to grow by 50 percent this year.

Add to that, tablets now make up about 12 percent. Meaning, together mobile makes up almost a third of organic traffic today, the report concludes.

Steps for improving traffic to your mobile site vary depending upon the configuration you are using:

Let’s look at the main problems the report identified for each of the three prominent types of mobile configuration:

The separate URL configuration had, by far, the largest number of errors, the study concluded.

The company says it gathered the data for the study using its Data Cube tool which collected over 100 terabytse of search related data from across the Web each week for analysis.