What If Your Business Had Trees as Clients? 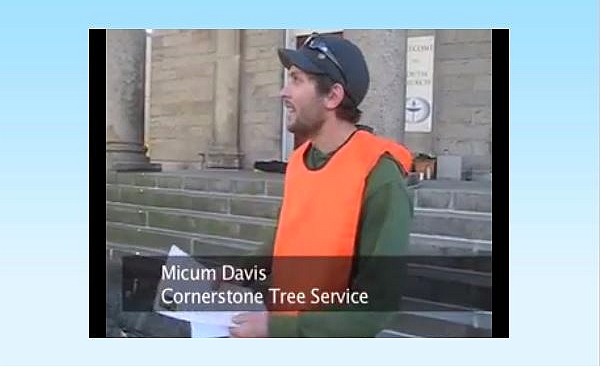 As strange as it sounds, that’s how entrepreneur Micum Davis feels about his business Cornerstone Tree Care.

“I speak for the trees,” is Davis’s motto.

Not very easy words to live up to when part of your business may even involve cutting them down from time to time.

That includes sometimes making the hard choice of telling a client paying for “wholesale removal” that some of those trees should stay.

Davis recently told his story to the Green Alliance, a local organization promoting savings at sustainable businesses in New Hampshire, Massachusetts and Maine.

In addition to his restraint when it comes to tree removal, Davis has other ways of looking after trees and the greater ecosystem in which they live:

He also does his climbing with a system of ropes and doesn’t use spikes to climb trees which would damage their bark and make them susceptible to disease.

But that’s not all. Davis also uses chain lubricants that are biodegradable instead of petroleum-based. He uses a Prius to drive to all jobs to cut down on emissions and uses biodiesel for all his diesel-powered tools.

Cornerstone’s office is a mobile trailer illuminated only by natural light through the windows, using no electricity. The company recycles all its waste wood into lumber, firewood and mulch.

The company also recycles almost 100 percent of the company’s other waste. This is done through extensive sorting of bottles, paper and other waste.

So it’s easy to see that, while Davis has paying human clients too, in a way he does work for the trees. His extensive sustainability efforts in his business are an attempt to preserve the environment for everyone.