Will Your Next Business Suit Be an Executive Hoodie? 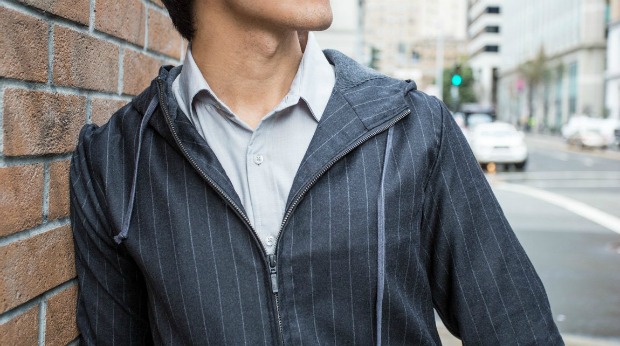 Whoever thinks that hoodies don’t belong in the workplace has probably never seen the Executive Pinstripe Hoodie from Betabrand.

The Executive Hoodie is made from suit fabric and retails for $168. Mark Zuckerberg provided the inspiration behind the hoodie, and its launch coincided with the social media giant’s IPO.

So could a hoodie become the next big thing for business professionals? Probably not. But some office environments are becoming more casual. And even more consumers can appreciate the humor of Betabrand’s creation.

The San Francisco based startup focuses on clothing items that display a bit of quirky humor. Founder Chris Lindland originally launched the clothing company in 2005 as Cordarounds.com, a retailer of horizontal corduroy pants. He marketed these using pseudo scientific facts such as sideways corduroy’s ability to create less friction, (which leads to cooler crotches.)

In 2010, he decided to broaden the company’s offerings and changed the name to Betabrand.

The brand’s strategy is to create unique products with a sense of humor and then allow the people of the Internet to help the products go viral.

Even the product descriptions display some novelty and humor. The Executive Hoodie’s description reads:

“After years of experimentation and one enormous bill at our local particle accelerator, the fashion physicists at Betabrand have finally combined business-suit and hoodie molecules at the subatomic level. The result: Our new, limited-edition Gray Pinstripe Executive Hoodie, a revolutionary business-casual (or casual-business, if you prefer) breakthrough.”

In addition to unique products and funny descriptions, the company also relies on participation from its customers and fans. The site displays images of customers wearing their purchases underneath the official product photos. It also utilizes a Think Tank, where customers can submit, vote for, and crowdfund new products and ideas.

That mix of customer involvement and a sense of humor that resonates with active Internet users is what has led to Betabrand’s viral success. Lindland had no prior fashion experience when he first launched the brand. But he did have an understanding of online marketing and a unique vision. And that has been enough to lead to online success so far.