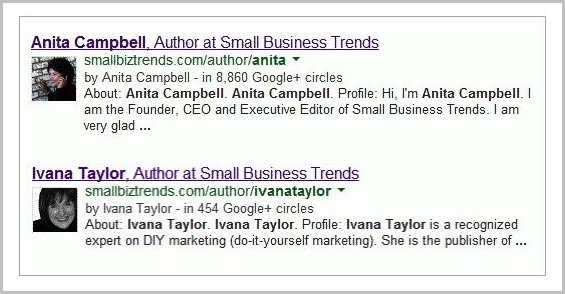 Google is removing two integrations of its Google Plus social network with Google search.

Up until now, a Google Plus profile photo and circle count appeared next to content in Google search results for those who had signed up for the connection.

The inclusion of a photo has been part of Google’s much promoted “authorship” feature and a tie-in with the social network.

Google says the features were removed to create a cleaner look and a sense of continuity.

“We’ve been doing lots of work to clean up the visual design of our search results, in particular creating a better mobile experience and a more consistent design across devices. As a part of this, we’re simplifying the way authorship is shown in mobile and desktop search results, removing the profile photo and circle count. (Our experiments indicate that click-through behavior on this new less-cluttered design is similar to the previous one.)”

Reporting on the announcement, Web consultant and Search Engine Land news editor Barry Swartz seemed skeptical that click-through on links would be unaffected by disappearance of profile photos in search.

He was not alone.

Comments from the search marketing community in particular were many and varied.

“There has been so much research done establishing a hard-wired affinity for detection of faces and it being an establishment of trust.”

Meanwhile others, like SEO Consultant Dan Shure, insisted the decision was just more evidence of Google’s rumored intention to dismantle Google Plus:

“My conclusion: Google either plans on letting G+ die on it’s own, or phasing it out. Author photos was one of the biggest incentives to join and use G+ at all.”

But on a separate Google Plus post, senior director of online marketing at Stone Temple Consulting Mark Traphagen had a different oberervation. He said that other factors like the increasing importance of mobile results probably drove Google’s decision, writing:

“Google has been telling us (and signalling by much of what they’ve done) that the game for the future of search is now to be won or lost on the mobile playing field. But with the addition of a street band’s worth of bells and whistles on the SERPs these past few years, they had set themselves up for a very wobbly and inconsistent search experience.

Google is replacing the profile photos with a clickable author name only for those using the “authorship” feature. The result will definitely make search results look cleaner on mobile searches.

But how will it affect those online business owners and entrepreneurs trying to build a personal brand?