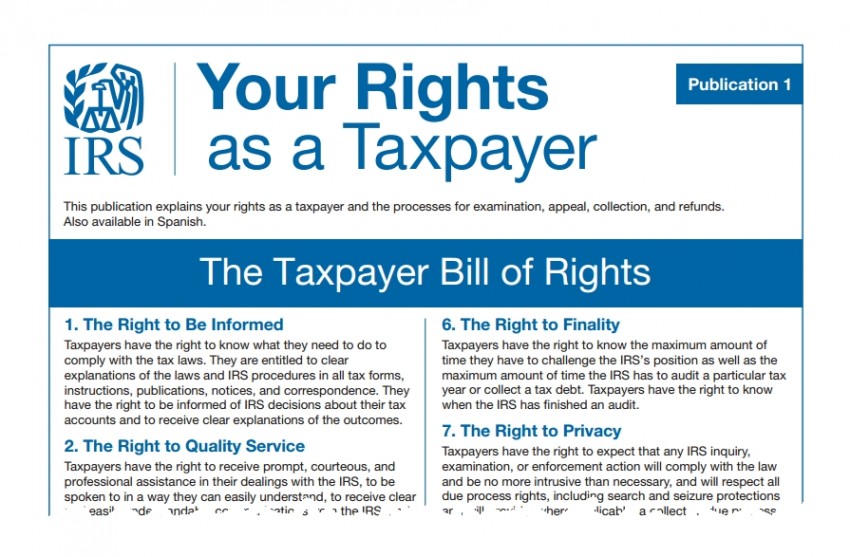 The IRS this week announced the adoption of the Taxpayer Bill of Rights.  According to the IRS, the document is intended to provide American taxpayers with a better understanding of their rights.

The document is called Publication 1, “Your Rights as a Taxpayer.”  It will be sent to millions of taxpayers when they receive IRS notices on issues ranging from audits to collection. The IRS says the Taxpayer Bill of Rights document will also be publicly visible in all IRS facilities on posters the IRS is having printed up.

The document consists of 10 rights.  While the document is new, the 10 rights are not new.  They are existing rights already in the tax code.  The IRS has grouped them into 10 categories and made them easier to find and easier to read.

And it all fits on just one page.  Considering that the U.S. tax code is nearly 4 million words long, it’s a public service just to summarize the rights down to a single page.

“These are core concepts about which taxpayers should be aware. The new Taxpayer Bill of Rights summarizes these important protections in a clearer, more understandable format than ever before,”  said IRS Commissioner John A. Koskinen in a prepared statement.

What’s In The Taxpayer Bill of Rights

IRS Publication 1, containing the Bill of Rights, initially is available in English and Spanish.  Later it will be available in Chinese, Korean, Russian and Vietnamese.

The IRS has also created a special section of IRS.gov containing the Taxpayer Bill of Rights.  At the moment it’s a barebones section, listing what the document contains, but the IRS says it will add to and update that section of the website.

Obviously, a single-page document can’t begin to answer every question about your rights.  Consider it a plain-language outline of your taxpayer rights.

Championed by the National Taxpayer Advocate

“Congress has passed multiple pieces of legislation with the title of ‘Taxpayer Bill of Rights,” Olson said. “However, taxpayer surveys conducted by my office have found that most taxpayers do not believe they have rights before the IRS and even fewer can name their rights. I believe the list of core taxpayer rights the IRS is announcing today will help taxpayers better understand their rights in dealing with the tax system.”

The IRS’s move is a step in a positive direction because it communicates in a way that is simple and easy to understand (unlike the tax code itself).  Plus, it tells people information they may not know.  For example, some small business owners may not even know that the Taxpayer Advocate Service exists and that it may be able to help if your business is facing an immediate adverse action.  Making people aware in plain language has value.

Also, it’s positive in the sense of communicating to IRS employees.   IRS Commissioner Koskinen emphasized that the Taxpayer Bill of Rights will serve as “a clear reminder that all of the IRS takes seriously our responsibility to treat taxpayers fairly.”  While the Taxpayer Bill of Rights won’t address any past abuses that may exist, nor stamp out all abuses, it’s meaningful.  What organizations choose to communicate (or not) to employees matters.  It sets the tone.  It reinforces culture.  In a vacuum of communication, employees can and do reach different conclusions.

The full text of the Taxpayer Bill of Rights is embedded in the Slideshare below: