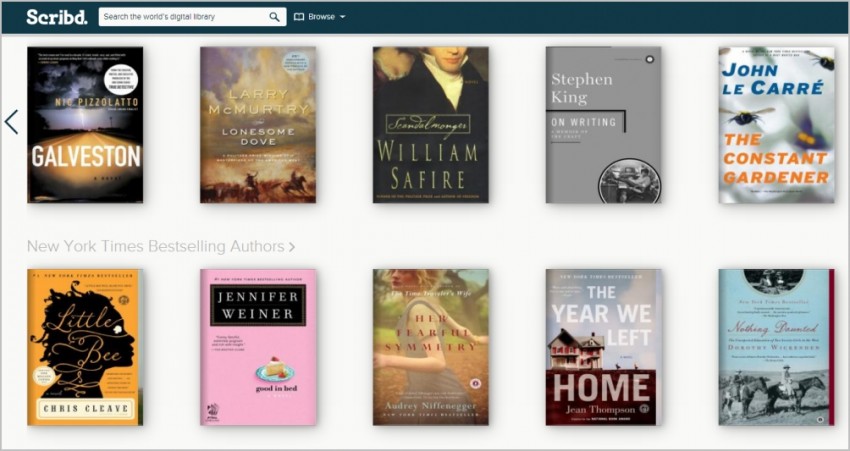 Scribd started out as a site where anyone could upload and share any kind of content — from legal documents to sheet music to historical documents.  It calls itself the world’s largest digital library.

The site, launched in 2007, last year made a major shift in its business model. Scribd started offering subscriptions to read bestsellers and other books from major publishing houses, in eBook form.  An $8.99 per month subscription lets you read an unlimited number of digital books.  Scribd has been called the “Netflix of books” for its subscription approach, and CEO Trip Adler is quoted in an AP article as saying he believes eventually the company can get to $1 billion in annual subscription revenue.

Books of all kinds of subjects are included — including fiction, business, reference, cookbooks, biographies and memoirs.

Even though the site got its start with the community uploading anything, Scribd’s approach is not about charging for bootleg copies of books that readers share without authority.  Rather, Scribd inks deals with publishers for the rights to include titles in its subscription offering.  In addition to the Simon & Schuster deal, at the end of April Scribd signed a deal with Wiley to add the Dummies reference book series.  The Dummies books can be found at the Wiley profile on Scribd.

Scribd has a category for business and economics books, including subcategories for entrepreneurship and small business books.  You can browse through the books, or sign up for a free trial.

According to Scribd’s website, the eBook subscription service includes books from over 900 publishers. HarperCollins, Lonely Planet, Open Road Media, Sourcebooks and Workman are other publishers represented. Scribd says its content is available in 80 languages worldwide.

Scribd eBooks can be read using the browser on your computer. They can also be read using Apple devices, Android and Kindle Fire.  They are not compatible with the regular Kindles, however.

Authors, according to the Scribd FAQs, will get compensated through the publishers.  Some books are also sold outright, rather than through subscription.

And what if you are self-published?  In December Scribd and Smashwords inked a deal to provide access to Scribd for Smashwords’ 70,000 authors and publishers that distribute through Smashwords.  Authors will “earn 60% of the list price on all qualifying reads,” i.e., if someone reads at least 30% of the book — up to a maximum of $12.50.  A smaller amount is paid on smaller portions of the book being read.  Another part of the deal is that Scribd will make sure that unauthorized copies of the author’s work are taken down from the site, even retroactively.

Oh, and all those millions of documents that the community uploaded to Scribd?  They are still around at Scribd, and you can still upload new documents.  But it’s clear that Scribd is placing its bet on the eBook subscription service.