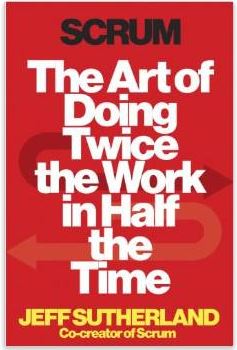 I reviewed a book, Lean UX, that described agile development practices for software creation. I also noted how some of those practices touch upon scrum, another principle popular among developers.

If you have not heard of scrum, give the book Scrum: The Art of Doing Twice The Work In Half  The Time by Jeff Sutherland a read. With Ken Schwaber and other managers at the company Advanced Development Methods, Sutherland applied the productivity principle during the early 1990s. It was first described in Japan only a few years before, but Sutherland and Schwaber are credited for its application in an business methodology.

Since that time, developers with even a hint of interest in object-oriented programming have adopted scrum principles in one form or another.  But these principles are also a fit for many businesses that seek efficiency improvements.

I discovered the book via NetGalley, and downloaded a review copy.  The book is meant for the topic of focusing on productivity that is meaningful. I think this book will help business owners better understand the productivity levers in their teams.

The Backstory on Scrum

It is a development methodlogy influenced from Japanese manufacturing concepts – think Kaizen, the Japanese word for “improvement,” and you get the idea.  The principle organizes planning specific brief steps and timeframes around objectives instead of waterfall tactics that slow down a project overall. Because so much work has been based on waterfall project management, scrum reassesses the ways humanity approaches work.  Sutherland invented scrum to work with less people and time, to be more effective with the resources in place.

This book, like Lean UX, offers a timely topic given the increased reliance on business activity associated with cloud services.  How do we decide what is important, and how do we address it?  The similarity in both principles occurs in setting sprint-like time frames to accomplish short, incremental objectives.  There’s also similarity between principles regarding simplicity.

But the differences between the books occur in how the simplicity is identified and achieved.  For example, check out how waste encourages inefficient behavior:

“There are three types of wastes identified by Taiichi Ohno that lead to people working harder, and for more hours than necessary…The first is “absurdity.” You want to give your team challenging goals – to push them to reach for more. But you don’t want them striving for absurd, impossible goals….”

“How many times have you heard someone brag that through their own heroic efforts they saved a project? Usually, this is greeted with back slaps, cheers, and congratulations…A team that depends on regular heroic actions to make its deadlines is not working the way it’s supposed to work.”

The third “Overburden” is nicely phrased. I like the Dilbert analogy in the text. It describes “onerous company policies” that can hinder team progress.

What I Liked About This Book

At first blush some of the book topics do not delve as deeply into specifics as much as I had liked.  A segment on doing one thing at a time is good suggestion, backed by research references, but it seemed as if it could appear in a good blog post as much as it can a process.

But as I read more chapters, I started to get the point of the book’s theme.  Sutherland writes about the experiences to highlight how endeavors can be better managed.  The text in infused with the author’s experiences and topics that illustrate how the principle apples to others such as the FBI’s interest in a updating its computer systems. Thus, the book requires the reader’s attention a bit more than Lean UX to get the gist.

But that gist can be worthwhile when the text is holistically considered as innovation tales.  Sutherland does give more specific guidance to cases. For example, he notes how Scott Maxwell, a venture capital founder, discovered through creating scrum teams that his firm’s productivity under its past structure was not really creating meaningful gains.

“OpenView discovered how people actually work instead of how they say they work…people who work too many hours start making mistakes, which can take more effort to fix than create.”

Sutherland also shows a graph Maxwell had worked out based on the examination.   More step by step processes illustrating how scrum can be applied would be helpful. For more specifics, you may want to find other texts and topics related to agile development. But this book does offer ideas in where managers should look to honor the kaizen ways of efficiency.

Who Would Benefit Most From This Book?

Like Lean UX, Scrum is meant for entrepreneurs seeking to put rubber to the road in growing their ideas into a viable business.   For those in that entrepreneurial category, combine this book with idea-generating books. Two that come to mind are The Solution Revolution and The Mesh.  You’ll be better equipped to be inspired for ideas and then specifying how to best work on those ideas, eliminate wasteful efforts, and to better frame your customer base via stories.

Business that are linked with large organizations will benefit, and can potentially layer ideas from this book with Aligning Strategies and Sales to get to the heart of improving processes.

Give this book a read to see how your business can better manage its productivity and bring its endeavors to light.