Guess Who Is Having Second Thoughts About the Minimum Wage in Seattle? 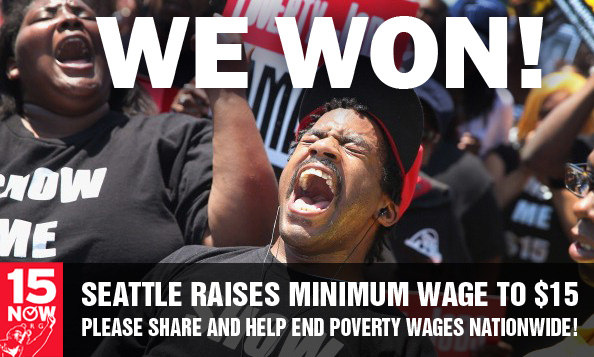 You’d expect certain objections to approval of a $15 minimum wage in Seattle this week. The International Franchise Association, for example, isn’t happy.

The oldest and largest trade organization of its kind represents franchises worldwide. And it wasted no time in filing a discrimination suit against the city over the new rules.

“The Seattle City Council and Mayor Murray’s plan would force the 600 franchisees in Seattle, which own 1,700 franchise locations employing 19,000 workers, to adopt the full $15 minimum wage in 3 years, while most other small business owners would have seven years to adopt the $15 wage. These hundreds of franchise small business owners are being punished simply because they chose to operate as franchisees. Decades of legal precedent have held that franchise businesses are independently-owned businesses and are not operated by the brand’s corporate headquarters.”

But it turns out even small business owners who originally supported the law are now having second thoughts.

Take Jody Hall, owner of Cupcake Royale, the brand behind seven Seattle coffee shops that sell artisan cupcakes and ice cream in the city. Hall’s reservations are probably common to a lot of small business owners caught between a rock and hard place in the national minimum wage debate.

Certainly many acknowledge it would be difficult, if not impossible, to live on the current Seattle minimum wage and would certainly like to pay employees more. But there are also business realities to consider.

Small businesses face intense competition in an unpredictable and changing economy, and must balance this reality against a desire to boost employee wages.

While Hall signed up in support of Seattle’s minimum wage increase originally, she recently admitted to KOUW.org:

“I really have a hard time. Even though I signed support for a seven-year phase in with the mayor, this is keeping me up at night like nothing ever has.”

One concern is a group called 15Now which is collecting signatures for a charter amendment. It would require businesses with more than 500 employees to start paying $15 immediately instead of the three year phase in offered by the recently passed city measure.

But more significantly to small business owners like Hall, it would shorten the time they have to reach $15 an hour to just three years. Hall says that would likely force her to close half her locations and layoff about half her 100 employees.

A similar story is told by other small business owners. Some have suspended plans for expansion within the city limits while others say any further growth will have to happen elsewhere.