Video Will Be 79 Percent of Online Traffic by 2018, Says Cisco 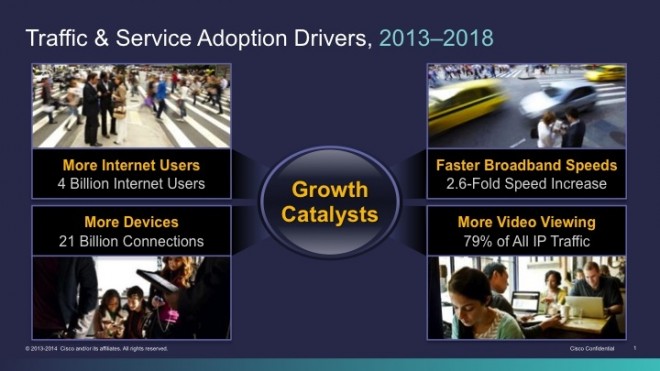 If you’re not using online video to market your small business or brand, you’re likely missing out on a lot of traffic. And now is probably a good time to get started.

A new study from Cisco, the company’s VNI Global IP Traffic and Service Adoption Forecasts, 2013–2018, reveals this. The study says that by 2018, 79 percent of all Internet traffic will be video-related. That’s an increase from the 66 percent share that video traffic claims today.

And by 2018, the amount of people online and the amount of devices that are Internet-enabled will grow exponentially, too. The Cisco study predicts that in less than five years, more than half of the world’s population will be active Internet users. That’s equal to about 4 billion people. At that time, there will be 21 billion Internet-enabled devices. That’s an increase from 2.5 billion people using about 12 billion devices today.

Doug Webster, Cisco’s Vice President for Service Provider Marketing, says in a video accompanying the release of the company’s study:

“Those devices can leverage faster broadband speeds and because it’s providing more convenience, people are able to do more things with it. And more often than not, they are turning to video.”

Cisco notes that the average broadband user’s speed will increase from about 13 Mbps today to 42 Mbps in 2018. This will allow the average user to stream 4K and UHD (Ultra High Definition) video from nearly any device online.

The study details the quality of video being watched in 2018:

There are many ways to market your business or brand with video. The equipment needed to create that content is becoming more attainable all the time.

Using video to promote your business gives the opportunity to give customers and fans a unique perspective from behind the scenes and using your own voice. It’s also an opportunity to educate, add value to your brand and potentially establish your expertise.

Video can be captured with most smartphones and shared quickly and easily through many social channels you are probably already using for your business.

The study also concludes that for the first time in the history of the Internet, by 2018 more traffic will be generated by “non-PC” devices. The trend is the result of the increase in the popularity of both smartphones and tablets.

Finally, the study predicts an increasing number of devices other than computers connected to the Internet — the so-called Internet of Things — in coming years. These include smart printers, other office equipment, video surveillance equipment and utility monitors which are increasingly coming online.