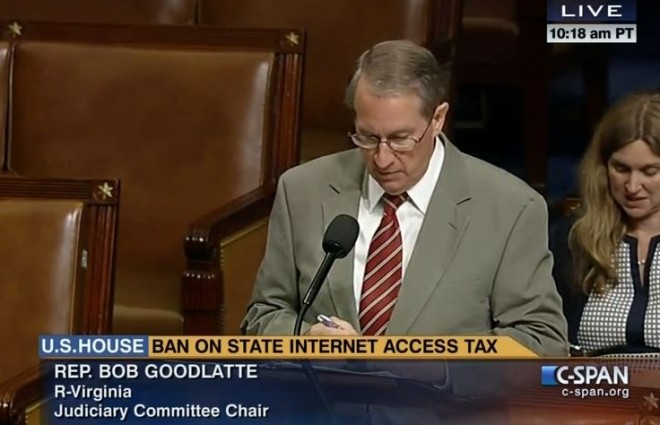 The U.S. House of Representatives wants to ban tax on Internet access at the state and local level. And they took the first step toward doing so this week.

Moratoriums on state and local tax for Internet hookup first imposed in 1998 and extended since then are made permanent under the Permanent Internet Tax Freedom Act.

The bill was passed by the House in a voice vote. But it does not impact a controversial Internet sales tax.

That tax has been debated for some time and has long been opposed by companies like eBay saying it would hurt online sellers who could be responsible for paying sales tax to the state where a seller resides. But the bill has yet to move beyond the U.S. Senate.

The new ban, if it becomes law, would also prohibited future Internet-only taxes and strike down grandfathered taxes in seven states that had enacted them before the 1998 moratorium, reports PC World.

U.S. Rep. Bob Goodlatte (R-Va.) Chair of the House Judiciary Committee, uses the example of PayPal co-founder Max Levchin to explain the importance of the bill he sponsored. A Ukrainian immigrant who came to the U.S. at age 10, Levchin’s career as an entrepreneur was made possible by cheap internet access.

In an op-ed for The Hill, Goodlatte explains:

“Levchin’s story exemplifies our new digital economy where computer and internet access serve as a gateway – if not a necessity – for the American Dream. Millions of Americans now rely on the internet to run their businesses, to educate themselves, to seek new opportunities, to research and write, and to communicate with family and friends.”

“The last thing that we need is another bill on the doorsteps of the American people. A tax on internet access would burden the millions of Americans who rely on the internet to conduct business, communicate, educate, and live.”

Goodlatte’s comments underscore the importance of keeping the cost of internet access low for online small businesses, entrepreneurs and their customers.

“We applaud the passage of the Permanent Internet Tax Freedom Act today in the House. PITFA is a necessary measure to keep Internet access free of taxation. This permanent ban is crucial for protecting access and opportunity for Americans in our growing digital economy.”

The U.S. Senate, which is considering similar legislation, has until Nov. 1 to act. That’s when the current moratorium on local and state internet taxation expires.

A Strike Against Sales Tax After All?

As we reported in the beginning, the current legislation as it stands will not address the Internet Sales Tax. The tax remains hotly debated even though it moved no further than the U.S. Senate last year.

But the passage of a ban on taxing access to the internet may ultimately make an internet sales tax harder to pass too, reports Politico.