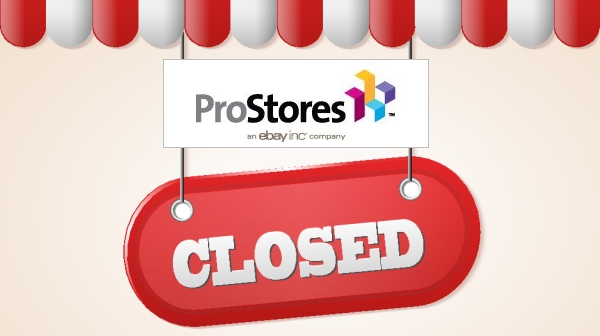 eBay recently announced that it is shutting down ProStores, leaving many merchants faced with a difficult decision.

ProStores, is a standalone eCommerce platform where you upload your products and sell them directly from your own site. ProStores was acquired by eBay recently and the auction site made the decision to cease operations. At the same time, eBay will also close Magento Go, another platform that was designed for small businesses.

If you use ProStores as your eCommerce platform, you can choose to switch now or wait until the site officially closes its shop (and yours) early next year. The problem with switching now, though, is that you’ll likely impact the SEO work you’ve put into your eCommerce site already. And that could have an effect on your holiday shopping sales.

ProStores merchants have been informed of the decision to shut down the eCommerce site. The company’s Senior Vice President of Product and Strategy Mark Lavelle posted a letter to the ProStores homepage informing others that no new stores can be created there.

In his letter, Lavelle writes:

“They should create a new store now so it will be fully indexed before ProStores shuts down, but leave the existing store online through the holidays and until the new store is fully indexed.”

John Lawson, the CEO of ColderICE Media and the author of “Kick Ass Social Commerce for E-Prenuers” tells Small Business Trends that now is a particularly bad time to consider switching. He says:

“With July and August right around the corner, the ramp up to the fourth quarter sales season is nearly here and it all starts with back-to-school. From there it goes to Halloween, then Black Friday/Cyber Monday into Christmas.”

“A rush to move your site right now could jeopardize or seriously hamper a merchant’s ability to capitalize on the busiest shopping time of the year! I feel that there is a good reason why eBay made the date February 2015. It will allow merchants to make a timely transition to minimize search redirection and also to not force its users to move during this shopping season. That could be detrimental at worst and painstaking at best.”

But even if moving now before the Holiday shopping season is a bad idea, don’t let the delay stop you from planning. Lawson explains:

“Now that does NOT mean you should wait before you begin the process! No, use this time wisely to plan and prepare for the heavy lift that can come with moving a merchant website presence.”

eBay has suggested several options for eCommerce merchants. One of those suggestions is, and has been in the past, Magento. Though part of Magento will be shut down by eBay, too, there are other options on that platform. Gardner warns that Magento may not be for everyone, though:

“It is said to have a high learning curve and would not be a good solution for non-technical store owners who can’t afford to hire a developer.”

Bigcommerce is another eCommerce solution that eBay suggests. While Bigcommerce is not fully integrated with eBay, there are apps within that platform that allow you to connect your Bigcommerce site with your eBay profile possibly making relocating your store easier.

Editor’s Note: This article has been edited to accurately reflect Gardner’s advice about setting up a new store away from ProStores.